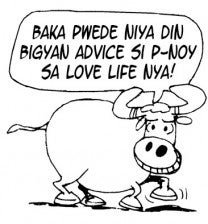 Better present him with a prenup before you take the plunge.

Senator Miriam Defensor-Santiago on Sunday gave Heart Evangelista this motherly advice amid talk that things were getting more serious between the actress and Senator Francis Escudero.

Evangelista and Escudero have reportedly been dating for several months now.

Escudero’s marriage to Christine Flores, who was a singer when she first met the senator, has been annulled, the senator’s staff confirmed. They have twin boys.

Santiago, who has taken a liking to Evangelista, admitted that she was the one who introduced Escudero and Evangelista to each other.

Calling herself Evangelista’s “surrogate mother,” Santiago initially demurred from making any comment about the two’s relationship.

“I’m hesitant to say anything because I’d be making a statement about the future of someone who is hindi ko ari (not my own),” an amused Santiago said in a radio interview.

She eventually relented, saying Evangelista would do well to make Escudero sign a prenuptial agreement before the two of them sign a marriage contract.

To be sure that Evangelista would not get the short end of the relationship, Santiago offered to draft the prenup she would show her beau.

“I’ve always advised her … that before you sign a marriage contract, to make the guy sign a prenuptial agreement first,” Santiago said.

She maintained that what Evangelista thought of Escudero was her personal decision, despite the obvious age gap. Evangelista is in her 20s while Escudero is in his early 40s.

“But I would have to ask her, as her surrogate mother, to make him sign the prenuptial agreement that I would write down,” said Santiago, a former trial court judge who is awaiting her summons to serve as a magistrate of the International Criminal Court.

Escudero let out a loud guffaw when told about Santiago’s prenup proposal but would not give a categorical comment whether that was acceptable to him.

Escudero uttered his thanks when told that Santiago had indicated that she trusted he would take care of Evangelista.

He added, however, that he and Evangelista had yet to take their arrangement to the next level.

“Hindi pa naman namin pinag-uusapan lahat ’yan (We have not talked about all of that),” Escudero said.