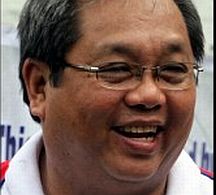 Malacañang said on Sunday that President Aquino’s order to “secure” Robredo’s effects only covered his offices at the Department of Interior and Local Government (DILG), National Police Commission, where the DILG chief sat as chair, and Camp Crame.

In a phone interview, deputy presidential spokesperson Abigail Valte made this clarification:

“The order given to him was to seal the offices, which means that the condo was not included. We were very emphatic with that (exception). The order was … for the offices only.”

When asked why Puno had tried to enter the condo unit (but prevented by a househelp), Valte said:  “Rico (Puno) may have assumed that the condo is included.”

She declined to elaborate.

Valte denied that conflicting orders were given to Puno and Justice Secretary Leila de Lima, who also went to the condominium unit, but this time was allowed entry to secure sensitive documents left by Robredo.

In an interview with state-run Radyo ng Bayan, Valte drew the “distinction.”

“Now, as far as I understand it also, when it comes to the personal effects and the condominium (unit), which is a private property of the Robredos, Secretary De Lima was asked by Attorney Leni Robredo to be the one to make sure that the personal effects were secured, and I think she was also getting some of Secretary Jesse’s things upon the request of Atty. Leni Robredo,” Valte added.

Valte also disclosed that it was De Lima, upon the request of Mrs. Robredo, who had actually asked the President to have the three offices locked down.

Asked about the correct sequence of events following the Aug. 18 plane crash in Masbate City that killed Robredo and the two pilots of the Piper Seneca, Valte said that it all started when the order was given to Puno as the DILG undersecretary in charge of police matters.

As to De Lima’s sudden appearance at the condo unit, Valte said:  “I’m not clear if she was asked to also secure the offices; it was Usec. Puno. And Sec. Leila came in when asked by Mrs. Leni (Maria Lourdes Robredo). From what I understand, Secretary De Lima was the one who went to the condo. Whether she was asked by the President (to do so), you should clarify (this with De Lima). I don’t want to speculate also. You should ask Leila what her orders are. I don’t know if there’s an overlap.”

Valte disclosed that “everything was secured” on the night of August 19, the day after the plane crash.  A Sunday, this was the day when the President hurriedly flew to Masbate to personally oversee the search and rescue operations for the passengers of the light plane.

Valte explained that confusions arose “only because (De Lima) went to the condo,” too, despite personal knowledge that Puno was the one directed by the President to secure Robredo’s offices.

“She knew about it (the order). It was her suggestion,” said Valte, recalling that it was actually De Lima who had reminded the President about the “confidential documents (in Robredo’s possession), that’s why he made the order … to seal (the offices).”

Valte, however, said De Lima’s action came after Mrs. Robredo talked to her.

At the time, Social Welfare Secretary Dinky Soliman was already in Naga City, consoling the widow.

Valte said that Puno was accompanied by police officers “to augment security,” and that members of the Presidential Security Group (PSG) were later seen at the offices.

Initially, it was unclear whether the PSG had been directed by the President to accompany Puno, or were securing the offices on orders from Executive Secretary Paquito Ochoa.

Ochoa only assumed as officer in charge of the DILG after Robredo’s remains were pulled out of the wreckage and brought to Naga City, which occurred on Aug. 21.

In the radio interview, Valte clarified that the deployment of PSG personnel was not an afterthought.

“Since the President was the one who gave the order, it was PSG that followed,” she said, explaining that the task of keeping sensitive documents “sealed” naturally fell on the lap of Puno because he was in charge of police matters.

Asked why it took the Palace—with President himself making the announcement—more than two weeks to say that the task had been given to Puno, Valte said: “I think that was already established.”

The Philippine Daily Inquirer posed this question because the public, through the media, was made to believe that all along it was De Lima, along with PSG personnel, who had been authorized by the President to ensure that the sensitive documents submitted to the late secretary would not fall into unauthorized hands.

“Security still had to be maintained, and that’s the shortest answer to that,” said Valte, when asked why the order was given on August 19, three days before Robredo was officially declared dead by Secretary Mar Roxas, the spokesperson for the search operations, in Masbate.

Read Next
CamSur has new bishop
EDITORS' PICK
Heads may roll at BOC, says Palace if sugar smugglers are allowed to use recycled import permits
What to watch out for when selecting a video surveillance solution
Apple warns of flaw that lets hackers into iPhones, Macs
House energy committee chair Arroyo bats for cheap electricity
46% of schools nationwide to have full face-to-face classes on Aug. 22
vivo brings to the Philippines a powerful smartphone with a slimmer body, the vivo Y02s for only PHP 6,499
MOST READ
DepEd to give teachers P5K cash allowance within first week of classes
LOOK: Miel Pangilinan dazzles in glittery pre-debut shoot
DOJ indicts bank officer in $2.1 billion Wirecard fiasco
PH importing sugar after all: Marcos okays 150,000 MT
Don't miss out on the latest news and information.