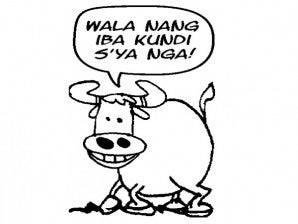 When broadcaster Korina Sanchez supposedly said on radio that “dark and small malignant spirits” were interested in taking over the post of interior secretary, was she really referring to Vice President Jejomar Binay?

ABS-CBN network has written to Binay’s office saying it is now conducting an inquiry into the matter, and a spokesperson for the Vice President on Thursday said it was looking forward to the results of the investigation.

The matter has evoked no small amount of interest, especially because Binay is expected to run for president in 2016 and may have as his main opponent the incoming Interior Secretary Manuel Roxas, the husband of Sanchez.

In a letter  delivered to the Office of the Vice President on Monday,  the Office of the Network Ombudsman (ONO) of ABS-CBN said it had initiated a probe of the allegation that Sanchez took a swipe at Binay in her radio show “Rated Korina” on August 24.

“The ONO has taken cognizance of your complaint and it wishes to inform you that it is currently undertaking an inquiry on the matter,” read the September 3 letter signed by the network’s ombudsman, Jose Vitug, and deputy ombudsman, Danilo Luis Mariano.

“We thank you for bringing up the matter to our attention,” said the brief letter addressed to Joselito Salgado, head of the Vice President’s media affairs department.

The Philippine Daily Inquirer tried to get a comment from Sanchez through Bong Osorio, head of corporate communications for ABS-CBN, but the network executive  said Sanchez was not allowed to comment on the issue at the moment.

“The ABS-CBN ombudsman has taken cognizance of the complaint, and is currently undertaking an inquiry on the matter,” Osorio said.

Binay’s camp has filed complaints against Sanchez with ABS-CBN and with Kapisanan ng mga Brodkaster ng Pilipinas (KBP) citing alleged violations of broadcasting ethics and accusing Sanchez of “using her program and her stature in the network for personal and political ends.”

The complaint this time, also signed by Salgado, claimed Sanchez was referring to Binay when she spoke in her show about “mga maiitim at maliliit na  mga maligno (dark and small malignant spirits)” supposedly interested in getting the post of secretary of the Department of the Interior and Local Government.

Sanchez was referring to people interested in the post  before the appointment of Jesse Robredo in 2010. Robredo died in a plane crash off Masbate on August 18.

Binay felt alluded to, saying he was the only one who had expressed interest in the position that year.

Binay’s camp felt the supposed reference was a personal attack on the Vice President, citing Sanchez’s link to Roxas, who was Binay’s main opponent in the vice presidential race two years ago. Roxas and Binay will likely face each other again in the fight for the presidency in 2016.

“We look forward to the result of their inquiry,” Salgado told the Inquirer.  “The issues we raised—conflict of interest, ethical conduct and professionalism—are valid issues and we hope the network ombudsman will see the merit and rule appropriately.”

The ABS-CBN ombudsman’s letter was also sent to the network’s top corporate and news officials and to Sanchez herself.

Last year, the Binay camp also complained against Sanchez for alleged deliberate omission of the Vice President’s name in relevant television news reports.  The network denied there was any bias against Binay.  With a report from Allan Policarpio