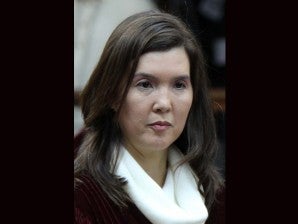 Sen. Pia Cayetano on Wednesday night moved for the deletion of an entire subsection in the Senate RH bill that Senate Majority Leader Vicente Sotto III said could be used to effectively legalize abortion in the country. INQUIRER FILE PHOTO

The Senate has removed controversial provisions that purportedly promote abortion and the use of birth control devices in a bid to break a deadlock in its version of the reproductive health (RH) bill.

Senator Jose “Jinggoy” Estrada on Thursday  said the upper chamber was evenly split 10-10 on the measure a day after contentious issues were addressed, with three senators still undecided. He disagreed with Senator Panfilo Lacson that 14 senators supported the bill in its current form.

“I will have to read it all over again, including the amendments,” Estrada said. “A lot of senators are still going to amend the provisions of the bill.”

Senator Pia Cayetano on Wednesday night moved for the deletion of an entire subsection in the Senate RH bill that Senate Majority Leader Vicente Sotto III said could be used to effectively legalize abortion in the country.

Cayetano also moved to amend the provision including certain family planning supplies and drugs in the government’s essential list of medicines.

Both committee amendments that Cayetano introduced on the floor “to put the issue to rest and allay fears that the RH bill will promote abortion” were adopted unanimously.

One amendment deleted the provision that said, “While this Act does not amend the penal law on abortion, the government shall ensure that all women needing care for postabortion complications shall be treated and counseled in a humane, nonjudgmental and compassionate manner.”

A new subsection was inserted saying that “abortion is a criminal act in accordance with existing laws,” said Cayetano, principal author of the bill which went into the period of amendments on Wednesday night after Sotto’s series of speeches blasting the proposed measure.

“Filipinos are known to espouse a culture of kindness and empathy. We uphold the tradition of reaching out and extending genuine care and concern for our countrymen in need, more so for women who are pregnant and in need of special care,” Cayetano said.

The other amendment said that the Philippine National Drug Formulary System should be observed in including or excluding birth control supplies in the essential list of medicines “in accordance with existing practice.”

In his turno en contra speech, Sotto said providing care for women needing postabortion complications could pave the way for unscrupulous doctors and midwives to conduct abortions in the open.

In the House of Representatives, lawmakers said they would attempt to discuss with representatives of the Catholic Bishops’ Conference of the Philippines (CBCP) their objections to its version of the RH bill, which is also in the period of amendments.

House leaders said that President Benigno Aquino was watching developments on the measure and could intervene again, as he did last month to end debates after 12 years and move the measure to its second stage.

In his State of the Nation Address in July, the President pushed for the immediate passage of the  measure regarded as an essential component of his economic development program.

Cavite Representative Joseph Abaya said the ruling Liberal Party had not talked about a common position on the issue, and even the President was being prudent.

“This is not like the impeachment,” said the party’s secretary general, referring to the swift vote in December in the lower house that led to the ouster of then Chief Justice Renato Corona. “There are certain other non-political issues involved so he has been very careful,” Abaya said in a press briefing.

Abaya also said both sides were hopeful that a proposed working group, which would possibly include Catholic bishops and opponents and supporters of the bill, would produce results.

With positive results, an intervention from the President may be unnecessary, he added.

House Majority Leader Neptali Gonzales II said it was difficult for the President to issue marching orders because opposition to the bill also concerned religious belief.

While Congress wants to maintain its independence, an issue that has split the House right down the middle is difficult to resolve and may need the President as an “arbiter,” Gonzales said.

“We will always be extending our hands of compromise,” Gonzales said when asked about the reported rejection by the bishops of the proposed technical working group.

Lawmakers intend to take advantage of the two-week break after budget deliberations and before the House resumes sessions to discuss issues in the panel.

They would present a compromise version of the bill, in which the distribution of contraceptives would be limited to the poorest of the poor, who could not afford these.

“It will give us the opportunity to hear the side of the bishops. After all, if it would be okay with them, maybe they would be able to convince House members who are stricter than the bishops to agree to the bill,” Gonzales said.