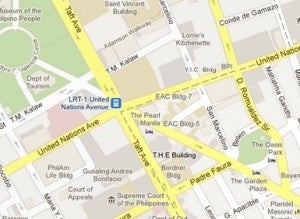 Police said a janitor found more than 100 rifle and shotgun shells that had been mostly emptied of their gunpowder, along with two metal pipes, blasting caps and cell-phone parts in a room at a Manila inn where a man stayed overnight before checking out at dawn on Tuesday. The man left with a backpack and a bag.

Police Inspector Arnold Santos of the Manila police Explosives and Ordnance Division said it was possible the man may have already assembled a bomb, prompting authorities to take security precautions.

Metropolitan Manila police Chief Alan Purisima said he ordered police to intensify street patrols and tighten security in shopping malls and other public areas. An investigation was under way to identify and locate the man and determine whether he had in fact assembled a bomb. Police prepared a sketch of the man based on the description of hotel employees.

Although al-Qaida-linked Abu Sayyaf militants have carried out deadly bomb attacks in the Philippine capital in the past, Purisima said it was too early to conclude whether the discovery of the bomb parts meant a terrorist attack was imminent. He said police have not monitored any recent threat in Manila from any terrorist group.

Read Next
5.6-magnitude quake damages 800 homes
EDITORS' PICK
Alex Eala wins Grand Slam on Independence Day: ‘I hope I made my contribution to the country’
Kai Sotto continues to inspire Filipinos by sharing his passions and stories with Smart Prepaid
Ahead of ONE: Full Blast II, Mongkolpetch warns Elias Mahmoudi: ‘Watch out for my fists’
G7 rivals China with grand infrastructure plan
PNP, PDEA destroy P25.8M worth of marijuana in Kalinga
Rare earth metals at the heart of China’s rivalry with US, Europe
MOST READ
Chel Diokno, Bro. Eddie, Ate Vi decline 1Sambayan 2022 poll nomination
1Sambayan names 6 choices to pit vs Duterte’s anointed in 2022
Groups slam Duterte ‘surrender’ to China
G7 rivals China with grand infrastructure plan
Don't miss out on the latest news and information.