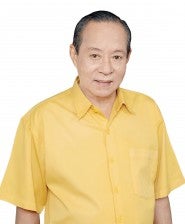 The City of Malabon has lost its mayor.

Malabon Mayor Canuto “Tito” S. Oreta, who had been locked in a protracted battle against lung cancer, passed   Monday morning. He was 73.

Oreta, who had   admitted he smoked several packs of cigarettes a day, died a few minutes before 10 a.m. at St. Luke’s Medical Center in Quezon City, where he had been confined since the early part of this year.

“We have had a few false alarms in the past on the mayor’s death, but this time, it’s for real,” Padua said.

City employees later flocked to the City Hall lobby as Oreta’s body, carried in a black hearse in a fast-moving convoy, passed by the building en route to his house in Barangay Maysilo where it will lie in state for the week.

“The city has lost a man who was well-loved and hugely admired by many, including local leaders belonging to different political affiliations, for his low-key personality, his soft-heartedness, and generosity, especially to the underprivileged and needy in the city,” said Antolin in a statement.

Canuto “Tito” Oreta was supposed to finish his third term next year.

Oreta is credited for developing the city’s infrastructure, notably the 11-story City Hall, a Government Center Annex, and the New Malabon City Sports Complex Building, among others.

The younger Oreta added that his uncle was also known for bringing together warring political factions and their supporters in his aim to make Malabon a more progressive and competitive city.

He was once the president of the the city’s Association of Barangay Captains, earning for   him a slot in the city council as a sectoral representative of village heads.

Oreta showed symptoms of lung cancer in 2010, Padua said, and was often in hospital for consultations and medication.

In March, he was confined at St. Luke’s Medical Center, and had not been discharged since then.

His nephew then took over as acting mayor in the older Oreta’s absence.

Oreta is survived by his wife, Ma. Aranzazu, and their five children.

There will be a wake open to the public at his house along MH del Pilar St. until Thursday.

On Friday, the body will be brought to Malabon City Hall. The cremation and burial   have been scheduled on Saturday.