Suddenly, saint-to-be Calungsod has too many relatives 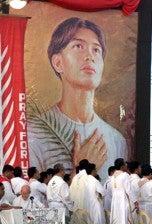 MANILA—In Cebu, everybody, it seems, is a relative of soon-to-be saint Blessed Pedro Calungsod.

This was the observation of Cebu Archbishop Jose Palma, who said he had signed over 3,000 letters of endorsement for visa applications to the Italian embassy ahead of Calungsod’s canonization next month.

Palma, who is also president of the Catholic Bishops’ Conference of the Philippines, told the media last week that the Italian embassy in Manila had even sent him a letter reminding him that he’d been signing too many supporting documents.

“In fact, I must have signed 3,000 applicants for visa that the Italian Embassy wrote to me about it. They said: ‘Archbishop you are signing too many endorsements.’ I said to them it’s my duty to sign, it’s your duty to screen,” Palma said.

The prelate said the number of those who want to be witness to Calungsod’s canonization reflects the fervor of Filipino faith. He also observed in jest that sainthood draws a lot of people claiming to be Calungsod’s descendants.

“Over in Cebu we usually say sainthood is relative. If you become a saint you discover that you have many relatives,” he said.

Palma said an 85-year-old man from Cebu would not let his frailty stop him from witnessing his ancestor’s canonization.

“An old man who is 85 said I have to go to Rome, but his children said he is too weak,” Palma said. “He said, no he is my relative I should go. His children were forced to accompany him,” said the Cebu prelate.

Proving to be a relative of Calungsod, a teenage Catholic martyr who is poised to become the second Filipino saint after San Lorenzo Ruiz, would be difficult. According to Church historians, there was no mention in the records of Calungsod’s birthplace.

The list of Calungsod’s possible birthplaces included Ginatilan in Cebu, Hinunangan and Hinundayan in Southern Leyte, Molo district in Iloilo, and Loboc in Bohol, according to historical research. In records, Calungsod was described as a “Bisaya.”

There were also very few details on his early life and there were no illustration of his likeness.

But there are known things about the country’s second saint. According to Church data, Calungsod was born in 1654 in the diocese of Cebu, which then encompassed the islands of Panay and Mindanao, as well as the Pacific island of Guam.

At age 14, Calungsod and some Jesuit priests went to Guam as missionaries.

Three years later, at age 17, Calungsod and Blessed Diego Luis de San Vitores were killed by angry natives. The Catholic Church in the Philippines has held Calungsod as patron of altar boys, Filipino catechists, migrant workers and the youth.

Pope Benedict XVI will declare Calungsod a saint on Oct. 21, 2012, at the Vatican. His canonization takes place more than a decade after he was beatified by Pope John Paul II in 2000.

If they could not go to the Vatican, Palma urged the faithful to join the national celebration in Cebu in November.

“That day as a nation we will thank the Lord for this new saint,” he added.