Sereno says her appointment as Chief Justice God’s will 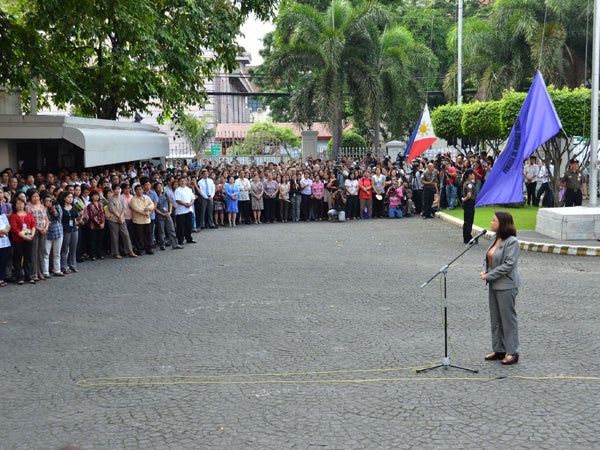 MANILA, Philippines—Chief Justice Maria Lourdes Sereno on Monday defended her appointment, saying it was God’s will, not politics, that put her in that position.

“Ito po [her appointment], ang buong mundo ay testigo na galing po sa Panginoong Diyos lamang. Hindi po ito gawa ng tao, hindi po ito gawa ng kahit anong political bloc. Hindi po ito paglo-lobby ng business or economic interest ngunit ang Diyos ang may alam kung ano ang plano nya sa taumbayan (The whole world is witness that this appointment is God’s will. No one person did this, much more by any political bloc. It did not come about due to lobbying by any business or economic interest group; it’s only God who knows what his plans are for the people),” Sereno said in a speech during the flag raising ceremony at the Supreme Court grounds.

“Sya lamang po ang nagtalaga sa inyong lingkod. Siguro po ay panahon na upang ibigay ang liderato [ng Korte Suprema] sa Kanyang isang abang lingkod (Only God put me in this position. It seemed like it was time to give the leadership of the Supreme Court to one of his humble servants),” she added.

Sereno’s appointment is historic but marred by controversy. Sereno is the first female Chief Justice and the third most junior member of the high court, thus bypassing 11 other senior justices.

Sereno will also serve for 18 years, the second longest in Supreme Court history. Her term will span three presidents and doused hopes of the other 13 sitting justices to ever be appointed Chief Justice.

In her speech, Sereno called on court officials and employees to work double time because much is needed to be done to institute reforms.

“Excited na po ako kasi may gagawin pa po tayong kakaiba sa ating hudikatura (I’m excited because we will be doing something different in the judiciary),” she added.

Sereno has opted to observe “dignified silence”, saying a justice is read only based on the decisions he or she writes. Sereno has not responded to allegations that she flunked her psychiatric and psychological examination.

She said in an earlier statement that accommodating media interviews would be time consuming and that she’d rather devote her time for judicial reforms.

Carpio, who served as acting Chief Justice after Renato Corona was impeached last May, De Castro, Velasco and Brion were nominated for the top SC post. But President Aquino III appointed Sereno.