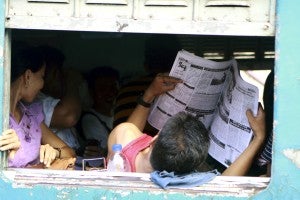 A passenger reads a local weekly journal on a commuter train that stops at a station in Yangon, Myanmar, on Aug. 28, 2012. Myanmar’s new information minister on Sunday, Sept. 2, 2012, predicted newspapers would be able to publish daily from early 2013, heralding fresh reform for a sector recently freed from decades of draconian censorship. AP PHOTO/KHIN MAUNG WIN

YANGON—Myanmar’s new information minister on Sunday predicted newspapers would be able to publish daily from early 2013, heralding fresh reform for a sector recently freed from decades of draconian censorship.

Aung Kyi told the Myanmar Times that state-owned newspapers – currently the only news publications able to be printed daily – would also be revamped with private sector involvement in the coming months.

“It is my sincere belief that daily [private sector] newspapers are essential for a democratic country,” said Aung Kyi, who replaced a prominent hardliner last week when he was appointed as part of a cabinet reshuffle seen as promoting reformists in Myanmar’s government.

The former labor minister, who acted as the liaison between Myanmar’s previous junta government and democracy champion Aung San Suu Kyi while she was under house arrest, said a code of practice should be discussed before changes were made to publication rules for private weekly journals.

He declined to give a firm date for the issuing of daily publication licenses to private sector news groups – many of which have turned to the web to provide up-to-the-minute content for a population hungry for information after years of restrictions – but estimated it could be “early next year.”

“I am sincere in wanting to achieve a comprehensive press media law that meets international standards,” he said, suggesting that the new proposed legislation could be delayed to give time for consultation with journalists and experts.

In August Myanmar announced the end of pre-publication censorship, previously applied to everything from newspapers to song lyrics and even fairy tales.

State-owned dailies include the English language New Light of Myanmar, which has shown scant signs of modernizing – except for an increase in celebrity gossip – since the country began its reforms.

But Aung Kyi said these publications were in line for “significant changes.”

Since taking office last year, President Thein Sein has overseen a number of dramatic moves in Myanmar such as the release of hundreds of political prisoners and Suu Kyi’s election to parliament.

Reporters jailed under the junta have also been freed from prison and a lighter touch from censors had already seen private weekly journals publish an increasingly bold array of subjects.

But there have been recent signs that it will take time for both newsrooms and the authorities to adjust to the new era of openness.

Two journals were recently suspended for a fortnight for prematurely printing stories without prior approval from the censors, prompting dozens of journalists to take to the streets in protest.

And the mining ministry is suing a weekly publication that reported the auditor-general’s office had discovered misappropriations of funds and fraud at the government division.