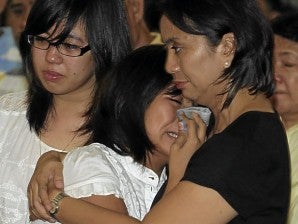 MANILA, Philippines — Some administration allies are prodding Maria Leonor “Leni” Robredo to run for the Senate, but the widow of the late Interior Secretary Jesse Robredo has said she is not interested in electoral politics, according to Budget Secretary Florencio Abad.

Abad, one of the Liberal Party leaders tasked with drawing up a list of senatorial candidates for the administration-led coalition, said the widow has declined the opportunity of running for senator in 2013.

“Mrs. Leni Robredo is not keen on entering politics despite the encouragement—that she is winnable and capable—by  well-intentioned individuals and groups,” said Abad, when reached by phone on Sunday.

He did not name these groups, but said: “And she should be respected for that position.”

Abad read the citation of the Legion of Honor bestowed on the late Robredo by President Benigno Aquino III prior to his interment in Naga City last Tuesday.

In response, the widow displayed candor but simplicity, thanking the President for ordering a state funeral to honor the legacy of her husband.

“Yes, how dignified and what composure! That character shows itself in the daughters, especially Aika,” said Abad, when the Philippine Daily Inquirer asked about Leni’s demeanor all throughout the tragic episode which had jolted the nation into recognizing the life achievements of the late secretary.

Abad did not say whether he and other politicians have been working on Aika.

LP members admitted that talks with other coalition members in the slate were beset with problems that have to do with electoral contests in the local level.

There could be conflicts between LP members and incumbents who are coalition partners, or with the usual wives, siblings or children of political kingpins in the local level.

Some LP members—who are either running for different positions, or returning to their old positions—frown at the time-honored equity of the incumbent principle, which gives reelectionists primordial consideration in the selection of official candidates.