Karate, batons for traffic aides to ward off hotheads 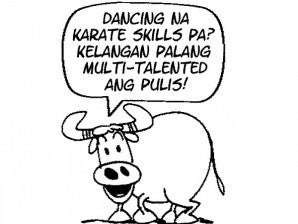 There are traffic enforcers who dance while on duty. Now they could be doing karate as well.

The Metropolitan Manila Development Authority (MMDA) is considering equipping its traffic enforcers with martial arts skills and batons, after the attack on a traffic aide by a motorist in Quezon City last month.

MMDA chair Francis Tolentino said the agency thought of self-defense training for its traffic enforcers after a cigarette company executive named Robert Blair Carabuena physically and verbally assaulted MMDA enforcer Saturnino Fabros after a traffic altercation on Aug. 11. The incident was caught by another motorist on video and went viral online.

Carabuena has made publicly apologized to Fabros but is still facing direct assault complaints filed by the traffic aide and the MMDA at the Quezon City prosecutor’s office.

“Perhaps we will increase their training in self-defense, have them learn karate,” Tolentino told reporters when asked what changes the agency would be making.

He said another measure being considered was equipping traffic enforcers with batons, which they could use if they feel their safety was being threatened.

“We don’t have them right now because it’s a little expensive, but we might include batons in their regular equipment,” Tolentino said.

MMDA assistant general for operations Emerson Carlos is all for the idea.

“The baton is the cheapest and the most accessible weapon that we can provide our traffic constables,” he said, adding that there were also proposals to provide the aides with pepper spray.

He noted that traffic constables on the night beat and in the motorcycle division already carry batons.

Fabros is not the only enforcer who has been attacked in the line of duty. In February, traffic constable Raul Reuterez, assigned to stop illegal drag racing, was attacked in Pasay City by pipe-wielding men.

In September 2011, traffic enforcer Larry Fiala was shot by a motorist that he was trying to apprehend in Quezon City. The incident was followed by the mauling of Rodivic Amante and John Rey Monghit by a group of men they were arresting for a traffic violation in Parañaque.