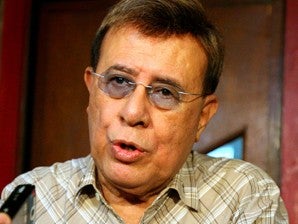 Manuel Morato could find himself in trouble after admitting before a Senate hearing that he had made “favorable” comments about an administration candidate during the 2010 presidential campaign in a government-sponsored television program that he was hosting.

Morato, a former PCSO director, co-hosted “Dial M,” a show featuring lotto winners that aired in the state-owned NBN-4, from 2004 until it folded last year.

As it is, Morato is already accused of conflict of interest after the Senate blue ribbon committee established that a debt-ridden company where he was majority stockholder sold a Makati hotel to the Prime Gaming Philippines (PGPI), or Berjaya Phil.

PGPI is the mother company of Philippine Gaming Management Corp. (PGMC), which supplied online lotto machines to the PCSO in the 1990s when Morato chaired the agency.

PGMC renewed its contract in 2006 without bidding while Morato was a PCSO director.

At the Monday committee hearing, Sen. Franklin Drilon asked Morato whether he had campaigned for any candidate as co-host of “Dial M.”

Morato, who claimed he was not paid for his hosting duties and could therefore “say anything as long as it’s not pornographic or indecent,” said that he and co-host Maggie de la Riva read text messages from viewers.

He said they were forced to comment on the text messages which all favored one candidate, Teodoro. He admitted that Teodoro was his candidate.

“Using public funds for the benefit of one candidate is certainly a criminal offense under the law,” he said.

Comelec spokesperson James Arthur Jimenez said Morato could be charged with electioneering if it is proven that he used his television program to promote the candidacy of Teodoro.

“That may be a violation of the Fair Elections Act, because the law said there should be no favoring of a candidate,” Jimenez said.

He said the Comelec could either undertake its own investigation or wait for the Senate report detailing Morato’s statements of admission.

Jimenez said there was no indication that Morato was directly involved in Teodoro’s campaign so Teodoro might not be liable.

Drilon is seeking documents from the PCSO pertaining to its lease contract with PGMC as well as the sale of the Best Western Astor Hotel in Makati to PGMC’s mother company, PGPI-Berjaya.

Senators said Morato would have to prove that the 2009 sale of the Best Western Hotel to PGPI-Berjaya was not tied to the 2006 extension of PGMC’s supplier’s contract with the PCSO.

The PGMC’s eight-year contract to lease computer hardware and software was renewed in 2006 up to 2015 without public bidding at a time when Morato was a PCSO director.

TF Ventures, the company that owned the hotel and was majority-owned by Morato, had a P1.3 billion debt to Deutsche Bank and was under receivership for years. It faced default in 2008.

Under a “dacion en pago’’ settlement approved by a Makati court, PGPI bought Deutsche Bank’s debt papers at a discount and took possession of the hotel.

Dacion en pago is a formal legal procedure by which a borrower cancels his debt by handing over to the lender the keys of a property in exchange for being discharged of the remaining mortgage debt.

Morato has insisted that he had no direct hand in the sale of the Best Western Astor Hotel to PGPI and that he was a mere PCSO director when PGMC’s contract was extended.

He said Deutsche Bank was the new owner of the hotel when PGPI took over, and that it was a court-designated receiver that negotiated the sale transaction.

“How can there be conflict of interest when we didn’t own it anymore?” he said in a phone interview. With a report from Jerome Aning