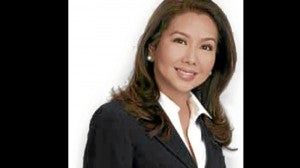 In yet another episode of a recurring rift, Binay formally complained to broadcast authorities about what he said were the “unethical remarks” of Sanchez, the wife of recently-appointed Interior Secretary Mar Roxas.

Binay felt alluded to when Sanchez, in her radio program “Rated Korina” on Aug. 24 (dzMM), referred to those who had postured to become interior secretary before the appointment of Jesse Robredo in 2010 as “mga maiitim at maliliit na mga maligno (dark, little ghouls).”

According to Binay’s camp, Sanchez had said:

(Why is it when there was no DILG secretary, there were dark, little monsters who were on the lookout to get the position? But the good thing is, President Aquino has a clear mind that’s why he installed Secretary Robredo to head the department).”

In a letter of complaint to ABS-CBN network, which operates dzMM, and to the Kapisanan ng mga Brodkaster sa Pilipinas, Binay’s spokesperson, Joey Salgado, said Sanchez’ remarks “constitute a clear breach of broadcasting standards and ethics.”

He also accused Sanchez of “using her program and her stature in the network for personal and political ends.”

“We are certain that Mrs. Sanchez-Roxas will claim, in her defense, that she did not name the Vice President and she had used the article ‘mga’ to refer to several unnamed individuals. To us, this is a flimsy defense,” read the complaint filed before the ABS-CBN ombudsman.

“It is public knowledge that before Robredo’s appointment, Vice President Binay had expressed his preference for the said position because of his background in local governance… No other personality was reported as having expressed interest in the said position,” said Binay’s camp.

The Vice President’s office said such a “personal attack … erodes the public’s faith in the professionalism and impartiality of ABS-CBN and its news personalities” and also shows “a clear conflict of interest on the part of Mrs. Sanchez-Roxas.”

Roxas, who married Sanchez in the runup to the May 2010 elections, was first appointed Transportation and Communications Secretary after losing the Vice Presidency to Binay. Many expect Roxas and Binay to square off again in the 2016 president race.

In March last year, the Vice President’s camp complained that Sanchez was omitting mention of Binay’s name even in news stories involving the official.

In a statement, Bong R. Osorio, head of Corporate Communications of ABS-CBN Corporation said: “I checked with our ombudsman, Honorable Jose C. Vitug, and I was told that he has not received the letter of Mr. Joey Salgado. We are wondering why other media outlets got the letter ahead of its intended addressee.”