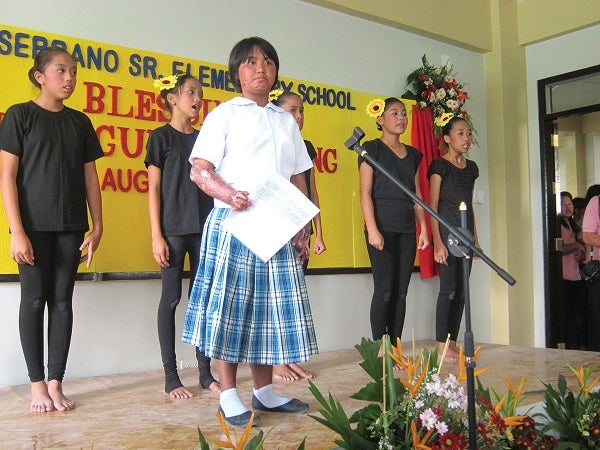 MOLINA with her scars of heroism: “God gave me the strength to do something I never thought I could.” JAYMEE GAMIL

Like a phoenix, a new school and a revitalized community in Parañaque City have risen from the ashes of a plane crash inferno.

The inauguration of the reconstructed F. Serrano Elementary School building was held in high spirits by residents of Barangay Don Bosco-Annex 35 on Thursday.

The occasion, which was graced by two Cabinet members and several local officials, also celebrated the heroism of an 11-year-old girl who risked her own life to save another child from the flames.

The school was ravaged by fire on Dec. 10 last year after a light cargo plane crashed into an adjacent slum community, killing 14 people and dislocating hundreds.

It also forced almost 4,000 pupils to resume classes crammed in a gym at the barangay’s National Shrine of Mary Help of Christians parish.

Sixth-grader Alyssa Talavera, the student council president, recalled how they endured seven months in the makeshift classrooms. “Our six-hour classes were reduced to four. We were falling behind in our studies,” she said. The parents also noted how the hot and cramped environs affected their children’s focus.

These inconveniences finally ended in August when they moved into a new P128-million, four-story school building with 60 classrooms, bigger than the three-story, 40-room structure destroyed in the fire.

According to Luistro, it was Parañaque’s 2nd District Rep. Roilo Golez who approached President Aquino in December for help concerning the fire-ravaged school.

The needed funds were released just 11 days after Golez spoke with the President, and reconstruction work started in March following the public bidding process that took about two months, he added.

School principal Rosalia Morit noted how the new campus rose “in record time.” “This is government in action,” she said.

“A positive outcome from this tragedy is that Parañaque showed that at times like this, (its people) could rise and come together,” Luistro added, noting that political squabbles usually start to intensify in the year before an election.

But Luistro heaped his highest praise on a Grade 5 pupil who had been hailed as a local hero since the disaster.

As the flames spread on her neighborhood, Rodelyn Molina rushed to save another girl trapped in the debris. That child later died but Rodelyn, who was hospitalized for two months for burns, was honored for her noble deed by the city government in March.

Asked to speak during Thursday’s program, Molina, quite shy and still bearing scars on her arms and jaws, said she simply “wanted to help in my own little way.”

She said she forgot about her own safety when she saw the other girl in grave danger. “What was important was that I acted as a child of God. God gave me the strength to do something I never thought I could.”

In his speech, Luistro told Molina: “You are a symbol for Filipinos and you showed that even children can be heroes. Never hide your scars. Those are scars of heroism.”