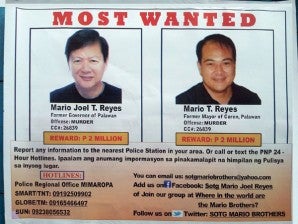 Sen. Panfilo Lacson, a former PNP chief, said what made the Reyeses’ flight worse is that they managed to escape when they were already on the government’s most wanted list.

Sen. Francis Escudero, chair of the Senate committee on justice and human rights, challenged the country’s law enforcers to bring the two former local officials back.

“These lapses happen.  Security sometimes becomes loose.  What’s alarming here is if it’s proven that immigration officials helped [the two accused] move out of the country,” Honasan told the Inquirer. “The usual pattern is that these fugitives go through the backdoor to avoid presenting the necessary papers on their way out.”

Lacson, who fled the country during the last months of the Arroyo administration shortly before a warrant for his arrest was issued, said the burden is now on the government “to track down wanted persons or those issued warrants of arrest by the courts.”

“That includes preventing these people from running away and evading arrest,” Lacson said in a text message.

“What makes the Reyes brothers’ case worse is the fact that they were already on the wanted list when they slipped out of the country using a regular port and in the presence of immigration officials and their security personnel,” he added.

The murder charges against Lacson have been dismissed.

Escudero, who’s also the chair of the Senate committee on environment and natural resources, said the Reyeses’ case should be a challenge for the police and the country’s other law enforcement agencies.

“Let this be a test case for the PNP and other law enforcement agencies to prove to our people that no one is above the law and that it’s not only the poor and the lowly, who are made ro account for their infractions,” Escudero said in a text message.

The government has placed a P2 million reward for the arrest of each of the Reyes brothers.  They are the principal suspects in the murder of environmentalist radio commentator Gerry Ortega.

Sen. Loren Legarda, chair of the Senate committee on climate change, said it was up to the authorities to find the Reyeses.

“We leave it to the authorities and let the wheels of justice take their course,” Legarda said in a text message.