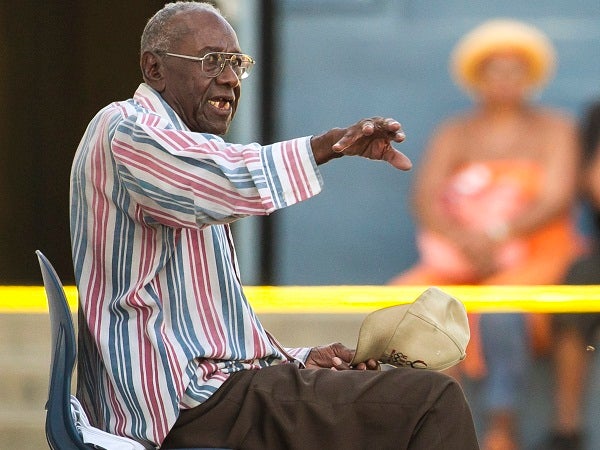 Senior driver Preston Carter, 101, talks with police officers after police say his car went onto a sidewalk and plowed into a group of parents and children outside a South Los Angeles elementary school, Wednesday, Aug. 29, 2012, in Los Angeles. Nine children and two adults were injured in the wreck. AP/Damian Dovarganes

LOS ANGELES–Nine children were injured Wednesday, four seriously, when a 101-year-old motorist crashed into them outside a Los Angeles school, officials and witnesses said.

One victim was four years old, local KTLA television reported after the accident near the Main Street Elementary School in south Los Angeles, which happened mid-afternoon just after students were dismissed for the day.

The driver, named as Preston Carter, was interviewed by a TV cameraman shortly after the crash.

“Well I lost control of the car, the brakes failed, I think. I was backing off of the parking lot, to go home, and lost control,” he said.

“I’m sorry, I have sympathy for them. I wouldn’t do that for nothing on earth… because the man that rules earth, he knew I wouldn’t have done it,” he told the ABC7 television station.