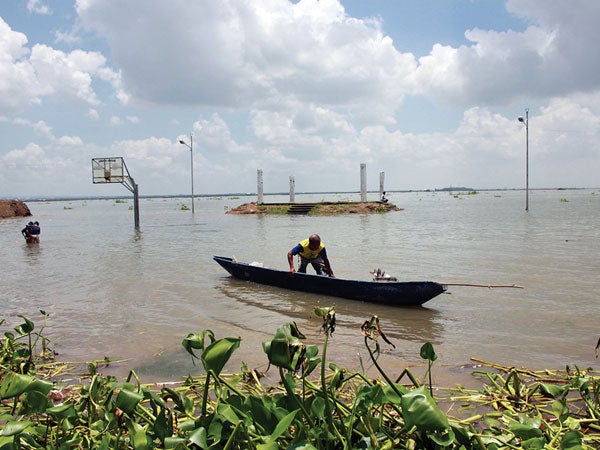 Flooding caused by a swollen Laguna de Bay continues to subside, but residents in the surrounding communities in Laguna hardly feel any relief.

The lake’s water level fell to 13.6 meters as of Tuesday from 13.8 at the height of monsoon rains that hit Laguna and several other provinces early this month, according to the Laguna Lake Development Authority (LLDA). “This, however, is still hardly felt in the lakeshore communities,” LLDA hydrologist engineer Emil Hernandez said by phone.

The agency expects the water level to return to its normal level by October.

According to the latest report from the regional Disaster Risk Reduction and Management Council (DRRMC), 144,070 people (31,886 families) remained in evacuation centers in Laguna and Rizal.

Noor Cañales, a resident of Barangay Tagumpay in Bay, refused to leave her inundated house until last week.

“I didn’t want to stay in the evacuation center because it’s overcrowded and I just had an operation (after giving birth),” she said. “But we decided to stay with a relative in Manila because the water inside the house started to reek of bad odor.”

The stench gives her headaches, she said.

Anastacia Erasga, who works at the municipal social welfare and development office, said the boggy smell comes from floodwaters that have been stagnant for weeks and “when the weather is humid.”

“In the coming days, we expect to see dead fish floating (like what happened during Tropical Storm ‘Ondoy’ in 2009),” said Cañales, whose husband is a fisherman.

Vicente Tomazar, director of the DRRMC in Calabarzon (Cavite, Laguna, Batangas, Rizal and Quezon), says health and social welfare offices are monitoring the flooded areas for coliform bacteria, which are often found in the feces of humans and animals.

Cañales said the centers do not have enough rest rooms so she prefers to stay home.

The Department of Education reported that 165 classrooms in Calamba and Sta. Rosa alone were damaged. In Sta. Rosa, 14,253 books were ruined, it said.

Twelve people were killed at the height of the nonstop rains in Calabarzon, while another remained missing in Rodriguez, Rizal.

In the evacuation centers in Laguna and Rizal, health authorities monitored 95 cases of respiratory infection, 45 cases of skin diseases, and other illnesses such as diarrhea and fever. Most of the victims were children below 5 years old.