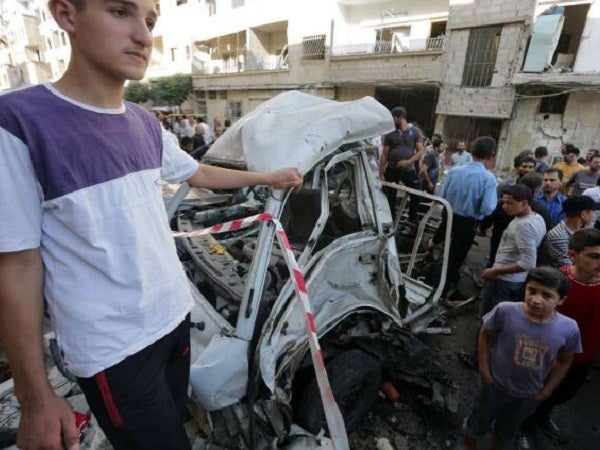 Syrians inspect damage at the site of a car bomb in the mainly Druze and Christian suburb of Jaramana on the southeastern outskirts of the Syrian capital on August 28, 2012. AFP/JOSEPH EID

BEIRUT–A car bomb that targeted a funeral killed 27 people Tuesday in the mainly Druze and Christian suburb of Jaramana on the southeastern outskirts of the Syrian capital Damascus, a watchdog said.
“The number of people killed in a funeral held for two supporters of (President Bashar al-Assad’s) regime has risen to 27,” said the Syrian Observatory for Human Rights.

Hours earlier, state television had put the toll at 12, adding that another 48 were injured.

“At around 3 pm (1200 GMT), a funeral procession was making its way to the cemetery, when a car parked on the side of the road exploded, killing and injuring many people,” an army official told AFP.

The funeral was held for two supporters of Assad who were killed in a bomb attack on Monday, the Britain-based Observatory said.

The force of the blast completely destroyed the facade of one building, while others suffered heavy damage, an AFP photographer reported.

State media blamed rebel fighters for the bombing, which came amid an intensified bombardment by government troops of eastern districts of Damascus that shelter some of the Free Syrian Army’s best organised battalions.

But the opposition Syrian National Council accused Assad’s regime of staging the bombing against its own supporters in a bid to divert attention from the killings of hundreds of people during an army assault last week on a largely Sunni Muslim suburb of the capital.

“The regime wants to cover up for its massacres,” SNC spokesman George Sabra said, alluding to the deaths in the town of Daraya that sparked an international outcry.

“It also wants to punish residents of Jaramana — who are of mixed religious backgrounds — for welcoming people who were displaced from nearby towns,” Sabra told AFP by telephone.

“The regime’s fingerprints are clear,” charged Sabra, himself a Christian. “The regime does not want anyone to welcome refugees from other cities. And it wants to turn the revolution… into a bloody civil war fought along sectarian lines.”

Some 80 percent of Syrians are Sunni Muslim, while around 10 percent belong to Assad’s Alawite community, five percent are Christian, three percent Druze and one percent Ismaili.

The opposition draws much of its support from the Sunni majority, who have borne the brunt of the government’s deadly crackdown.