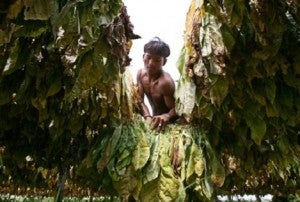 The tobacco companies do more harm than good to the farmers that supply them with tobacco leaves for their cigarettes, according to a public health expert.

Tobacco farmers, especially the women, are more susceptible to taking up smoking, which exposes them to various health risks, said Dr. Antonio Dans, a professor at the University of the Philippines–Philippine General Hospital (UP-PGH).

The industry has argued that the welfare and the income of farmers will be adversely affected if the government amends the “sin tax” law to increase the taxes on tobacco and alcohol products.

“But the other side of the coin is that smoking also affects the health of farmers and their families,” Dans told a forum  sponsored by the Action for Economic Reforms (AER).

Based on data from the 2008 National Health Nutrition Survey, there are more women smokers in provinces where tobacco is grown, Dans said.

In the main tobacco-growing regions of Ilocos, Cagayan Valley and the Cordillera Administrative Region (CAR), the incidence of smoking among women is 24.7 percent. In nontobacco producing regions, it is 17.9 percent, he said.

“Women in tobacco regions smoke more and have therefore exposed themselves to diseases,” Dans said. Smoking increases the risk for heart attack, stroke and cancer, he said.

“Not everyone will die from smoking but a lot of people will,” said Dans.

Smoking is responsible for 71 percent of lung cancer deaths in the world, according to the Department of Health. Lung cancer is the leading form of cancer in the Philippines and this is attributed to high smoking rates, particularly among men, the DOH said.

Medical and economic experts at the forum said more and more Filipinos will be at risk of noncommunicable diseases such as stroke and cancer if the government fails to curb cigarette smoking.

Kai Kaiser, senior economist at the World Bank’s Poverty Reduction and Economic Management, and Dr. Frank Chaloupka, an expert on cigarette taxes, said the government should look at the measure to increase taxes on cigarettes and alcohol as a health measure rather than a fiscal measure.

They noted that the government will eventually foot the bill for these ailments that will affect the working population.

The Philippines currently has one of the highest tobacco use in the Western Pacific, according to the World Health Organization (WHO).

About a third of Filipinos smoke, with nearly half of Filipino males hooked on the habit. Many teenage Filipinos have also been seduced by the allure of smoking. According to studies, about 23 percent of 13- to 15-year-olds in the country smoke.

An average Filipino smoker puffs 1,073 cigarette sticks every year, while the rest of smokers in the region consume less than a thousand sticks, the WHO said.

DOH data show that a 10-percent increase in tobacco taxes would reduce by two million the number of smokers by 2016. Raising the sin tax is also expected to reduce by 20 percent the number of yearly deaths due to smoking-related diseases.

The Senate committee on ways and means is conducting hearings on two sin tax measures, Senate Bill Nos. 2763 and 3249, seeking to impose excise taxes on liquor to be computed based on alcohol content and per liter of volume capacity in the case of liquor, and per pack in the case of cigarettes.

Beer and cigarette companies oppose the proposed measures saying they discriminate against low-priced brands which they said would incur the biggest tax increase under the proposals.

Senator Edgardo Angara on Tuesday indicated his preference for an ad valorem system in the imposition of sin taxes.

In a statement, Angara said a uniform tax rate charged on all products based on their price would be more equitable.

The government followed an ad valorem system until it shifted to specific tax in the mid-1990s.

An ad valorem is tax based on a product’s value or retail price, which varies among stores. A specific tax is based on a particular quantity of a product rather than its value, and is withheld at source.

Finance officials oppose the ad valorem scheme, saying it would be difficult to administer. With a report from Norman Bordadora