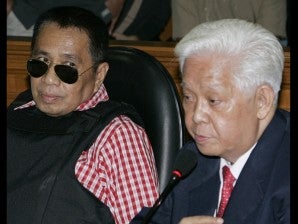 HERE’S LOOKING AT YOU. Former Commission on Elections (Comelec) official Lintang Bedol glances at Comelec Chairman Sixto Brillantes as he answers questions during a press conference Tuesday, July 19, 2011 at the Comelec office. Bedol, who was allegedly linked to massive election fraud during the 2004 presidential election, surrendered to the authorities on Tuesday. AP

The Commission on Elections (Comelec) has decided to detain Bedol in Camp Crame after convening for an hour after the former election supervisor appeared at their office at around 9:00 a.m earlier.

Bedol arrived at the PNP custodial center aboard a white Toyota Innova. He was wearing a bulletproof vest.

The media were not given a chance to interview Bedol as the gates of the custodial center were immediately closed after his vehicle arrived.

Bedol’s lawyer, Roberto Ultado Jr.  said his client was detained under the Department of Interior and Local Government (DILG) for one week before he was turned over to the Comelec. He also said that DILG gave security to Bedol.
Bedol disappeared after he was summoned by the Comelec to testify on alleged irregularities in the 2007 senatorial elections. He was subsequently cited for contempt and sentenced in absentia to six months imprisonment.