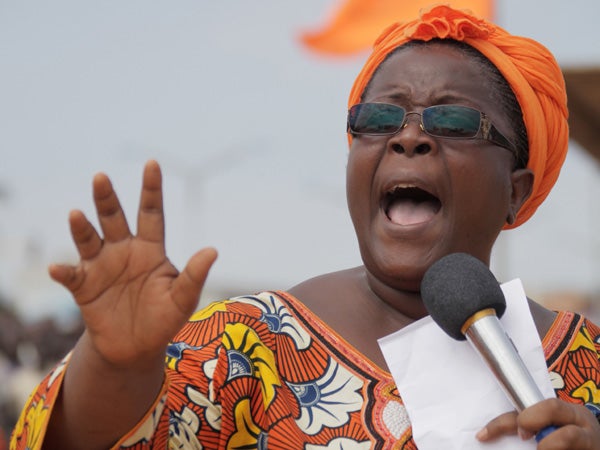 In this Saturday, Aug. 25, 2012 photo, female opposition leader Isabelle Ameganvi calls on Togo’s women to observe a one-week sex strike beginning Monday, in Lome, Togo. The female wing of a civil rights group is urging women in Togo to stage a week-long sex strike to demand the resignation of the country’s president. AP/ Erick Kaglan

LOME, Togo – The female wing of a civil rights group is urging women in Togo to stage a week-long sex strike to demand the resignation of the country’s president.

Women are being asked to start withholding sex from their husbands or partners as of Monday, said Isabelle Ameganvi, leader of the women’s wing of the group Let’s Save Togo. She said the strike will put pressure on Togo’s men to take action against President Faure Gnassingbe.

Ameganvi, a lawyer, told The Associated Press that her group is following the example of Liberia’s women, who used a sex strike in 2003 to campaign for peace. “We have many means to oblige men to understand what women want in Togo,” Ameganvi said.

The sex strike was announced at a rally Saturday of several thousand in the capital city, Lome. The demonstration was organized by a coalition that is protesting recent electoral reforms which they say will make it easier for Gnassingbe to win reelection in the polls set for October.

Gnassingbe came to power in 2005, following the death of his father, Gnassingbe Eyadema, who ruled the West African country for 38 years. Gnassingbe has not commented on the sex strike, nor has his wife. Earlier this month, two anti-Gnassingbe protests were dispersed by police using tear gas and more than 100 people were arrested.

But it is the sex strike that has people talking in this small country of 7 million people.

“It’s a good thing for us women to observe this sex strike as long as our children are in jail now. I believe that by observing this, we will get them released,” Abla Tamekloe said. “For me, it’s like fasting, and unless you fast, you will not get what you want from God.”

When asked if her husband would agree, Tamekloe said: “It is easy for me to observe it. I am used to it, but I am not sure my husband will accept, but I have to explain to him.”

Another Togolese woman said she supports the sex strike, but she does not know if she can carry it out for a full week.

“I do agree that we women have to observe this sex strike but I know my husband will not let me complete it. He may agree at first, but as far as I know him, he will change overnight,” Judith Agbetoglo said. “So I don’t believe I can do the one-week sex strike. Otherwise, I will have serious issues with him. He likes that too much.”

Though the call for a sex strike seemed to please many women, some men, including heads of opposition parties and human rights groups in the anti-Gnassingbe coalition, did not believe it would be a success.

“One week sex strike is too much,” said Fabre of the National Alliance for Change, who suggested a shorter period, amid laughter from the crowd at the demonstration. “Let’s go for only two days”.

Others were skeptical of Isabelle Ameganvi’s call.

“It is easy for her to say because she is not married herself. She does not live with a man at home,” said Ekoue Blame, a Togolese journalist. “Does she think women who live with their husband will be able to observe that? By the way, who controls what couples do behind closed doors?”

Read Next
Swarm of quakes rattle California, Arizona – USGS
EDITORS' PICK
Being a celebrity isn’t wholly an ‘advantage’ in the election, says Sotto
Acer starts the year off strong with the Aspire Vero National Geographic Edition
Octogenarian jailed for ‘stealing mangoes’ freed after people chip in for bail
Gov’t eyeing COVID-19 tests in pharmacies
Gear up and get ready to play with Yamaha Mio Gear
Over 3 Million worth of prizes to be won at Smart Padala’s SENDali Manalo Promo!
MOST READ
Natural immunity more potent than vaccines during US Delta wave—study
Mocha Uson, Michele Gumabao draw flak for running under party-list representing mothers
Bongbong Marcos-Sara Duterte tandem adds Zubiri, Gadon, Marcoleta to Senate slate
Help pours in for octogenarian jailed for ‘stealing’ mangoes in Pangasinan
Don't miss out on the latest news and information.