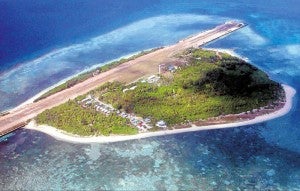 PRICE OF FREEDOM For the few dozen Filipinos living on remote Kalayaan Island, each day is a battle against loneliness and a love affair with nature. This photo handout released on July 13 shows Kalayaan, which means “Freedom” in Filipino, which was created in 1978 mainly to assert the Philippine claim to the disputed territory in the Spratlys. AFP / KALAYAAN MUNICIPAL OFFICE

PUERTO PRINCESA CITY—For the few dozen Filipinos living on a remote speck of land in the West Philippine Sea (South China Sea), each day is a battle against loneliness but also a love affair with nature.

Contact with the outside world is limited and comforts are few for the residents of Kalayaan town, which exists mainly to raise the Philippine flag and fend off the other claimants to the Spratly Islands.

“People here just play billiards, ping-pong. We have no markets and no malls. You need a special mindset to stay here,” said Eugenio Bito-onon, 55, mayor of the town of Kalayaan, the Filipino word for freedom.

Bito-onon, who initially went to Kalayaan in 1997 to work as a town planner, said he learned to cope by playing guitar, watching videos and simply walking around the small islands surrounded by the purest blue ocean waters.

“I love the beauty of the place. It is so peaceful,” the deeply suntanned Bito-onon said while on a visit recently back to Puerto Princesa, the nearest major Philippine city on Palawan Island.

Kalayaan was created in 1978 mainly to assert the Philippines’ claim to the Spratlys, a group of more than 700 islets, reefs and atolls in the West Philippine Sea that is believed to sit above vast natural resources.

The Philippines, China, Vietnam, Malaysia, Taiwan and Brunei claim all or part of the Spratlys.

Most of the other claimants have a presence on some of the other islands in the Spratlys to help boost their positions.

But the Philippines insists Kalayaan—which covers five islands, two sandbars and two reefs—has the only functioning local government of its own in the Spratlys.

Regional tensions in the long-running territorial dispute have flared again in recent months, with the Philippines accusing China of taking increasingly aggressive actions in the Spratlys and nearby waters.

But Bito-onon said the diplomatic tensions barely affected the residents, most of whom live on the 37-hectare island widely known as Thitu, which the Philippines calls Pagasa, or Hope.

Mostly this is because of their isolation.

Pagasa is about 450 kilometres northwest of Palawan, roughly 600 km from Vietnam’s coast and more than 900 km from China’s Hainan Island.

Residents or others traveling to and from Pagasa normally have to hitch a ride on a creaking military supply ship that takes seven days to make the journey, according to Bito-onon.

There is an airstrip in Pagasa, but it is made mostly of compacted earth and cannot be used when it rains.

Aside from about 100 Filipino soldiers assigned to the area, the town has about 200 registered voters but only about 60 live on Kalayaan at a time because that is all government provisions can sustain, Bito-onon said.

Aside from a few fishermen and construction workers, most residents are government employees and their families who take turns, each serving for about three months on the islands.

Residents are attracted there by the government-provided jobs and housing, as well as the free provisions of essentials such as rice, cooking oil, sugar, noodles and canned food, according to Bito-onon.

Fish are also plentiful in the sea and wells provide residents with more than enough fresh water.

But Bito-onon said it was not easy to get used to the isolation and lack of amenities—there is no school and no town health worker since the local midwife resigned last year to get married.

“Some people can’t take it. They snap and begin talking to the flies or get drunk all the time. They get into fights while drinking,” he said.

Although several families have raised children in the islands, they have to be sent to live elsewhere once they are old enough for school.

Bito-onon’s wife lives and works in Puerto Princesa. When the couple’s two sons were still children, the family would only spend about a month and half together on Kalayaan.

Kalayaan has an administration “extension office” in Puerto Princesa, which the mayor visits frequently.

The island does have satellite television but the satellite discs are slowly being corroded by the sea spray that has already destroyed solar power generators.

A mobile phone company has struggled to set up services on Pagasa, but Bito-onon said the signal was inconsistent.

He complained that despite the Philippines being the closest of the claimants, its occupied islands were among the least developed in the Spratlys.

Some other islands have strongly built structures with concrete airfields and one held by Malaysia even has a hotel for tourists, Bito-onon said.

In his “extension office,” Bito-onon displayed pictures showing Chinese, Malaysian and Vietnamese-occupied islands with marinas, where ships can dock.

Bito-onon hopes that someday he can attract tourists and even investors from the fishing industry to Kalayaan.

But first, the national government will have to upgrade and lengthen the airstrip and build a marina.

Construction worker Nonelon Balbontin, 34, said life was much better in the Spratlys than in chaotic, overcrowded and polluted Metro Manila, where he used to live.

“It is very beautiful. It has a good climate, I have a job there. We have no problems, no sickness, the food is free, paid for by the government,” he said while visiting Puerto Princesa.

Balbontin, who also works on Kalayaan’s salt-making project, said that in his free time, he caught enough fish, both for his family and for sale.

He also plays basketball with the military men who are eager for any recreation.

At night, he likes to roam around the island to spot sea turtles laying their eggs so he can report them to a local environment officer for tagging and protection. AFP