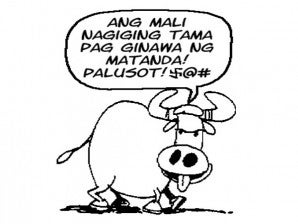 Plagiarism is rampant in the Senate, but some staff members of senators consider it an acceptable practice.

Passages from various authors are included in the speeches of senators and entire legislative bills are being copied and passed off as their own.

The chief of staff of Senate Majority Leader Vicente Sotto on Wednesday said it was a common practice among Senate staff members to scout for bills that a previous Congress had failed to enact into law and repackage them as their bosses’ pet measures.

For instance, the reproductive health (RH) bill that Sen. Miriam Santiago filed in 1997 has undergone so many incarnations before its current packaging as the committee report that she and Pia Cayetano, chairperson of the committee on women and family relations, now endorse.

Why reinvent the wheel?

“Copying is a common practice. Why do you need to think of a brand-new measure when a good one that was not enacted already exists?” said Hector Villacorta, Sotto’s chief of staff.

At a breakfast forum, Villacorta said former senators would sometimes approach incumbent ones and ask them to refile the measures that failed to reach approval during the former senators’ term.

“They request new senators to refile [the bills] because (these are) already in the archives. Why reinvent the wheel? Re-filing is an accepted practice. It is called copying,” he said.

There are also instances when a senator’s staff goes through bills not enacted by a previous Congress and copy these word for word.

“It’s really copying …. Why exert effort when these bills are just lying around?” Villacorta said.

He explained that this was an acceptable practice because “a bill not acted upon dies with an old Congress. So when the new Congress takes over, the staff of the new senators will find out that can still be revived.”

Two senators are being assailed on social networking sites for their alleged failure to attribute information from sources on the Internet contained in their speeches.

Sotto was chastised for not acknowledging a US blogger whose work his researcher cited in a speech against the RH bill last week.

Cayetano was similarly ridiculed for allegedly not mentioning two institutions in separate speeches on maternal health and the environment.

Even Villacorta himself was whipped on the Web for saying that Philippine laws do not have provisions that penalize anyone who freely lifts information from the Internet.

Still, Villacorta said it was easier to rationalize the filing of unoriginal bills than delivering unoriginal speeches because even the Constitution was “plagiarized” from the US charter.

“We plagiarized the US Constitution. All the amendments became our Bill of Rights. But do they call us a plagiaristic country? No, because the law is based on precedent,” Sotto’s chief of staff said.

“Even our Insurance Code is a plagiarized document. The proposed freedom of information bill is plagiarized. What’s more, the Senate and House (of Representatives) versions of the RH bill are very similar. So who is plagiarizing who?” he added.

Villacorta reminded everyone that “the Bible reached us today because the monks copied from the Greeks. Everything really started from a little copying.”

“Even our image was copied from God. We are all plagiarists,” he said.

Former Sen. Ernesto Maceda was in the Senate Wednesday and acknowledged that the copying of bills from a previous Congress was indeed considered acceptable among his peers during his term.

In the case of speeches, “when we lifted a passage or quotation, we gave the corresponding attribution to the source,” he said.

However, Maceda would not hold Sotto and Cayetano personally accountable for passages in their speeches that might have failed to attribute the right sources.

“I can believe the two senators if they say their speeches were prepared by their staff. It was an omission…. I think to me it’s not a big thing. It’s forgivable if it does not really affect the overall content of the speech…. Almost all senators depend on staff work,” he explained.

Santiago was also magnanimous when asked about the issue.

“Maybe the speech writer just overlooked it…. This is politics so I guess we should give more leeway to the senators as long as later on they admit that they took it from some other source and they acknowledge that source,” she said.

“This is not academe where it is grave, in effect a mortal sin not to attribute something to its source or author,” Santiago added.

Still, Maceda said it would be good if the senators would “express an apology to authors asking it.”

Not on Villacorta’s watch in the case of Sotto. “Senator Sotto was not personally responsible for preparing the speech. He only read it on the floor. Besides, I already apologized to (US blogger) Sarah Pope,” he said.

Villacorta said Sotto’s researchers initially tried searching for the website of US author Natasha Campbell-McBride but could not open it.

The researchers resorted instead to Sarah Pope’s blog, believing her quotes of Campbell-McBride’s work was verbatim.

“We cannot draw up a speech that says ‘according to this blogger who quoted this author.’ It’s simply too awkward. Besides, what would the Senate President say,” Villacorta said.

“A whole gamut of ‘according to’ would also not make the speech credible. This is the Senate we are talking about,” he added.