Carpio presides over 8th groundbreaking for Manila Hall of Justice 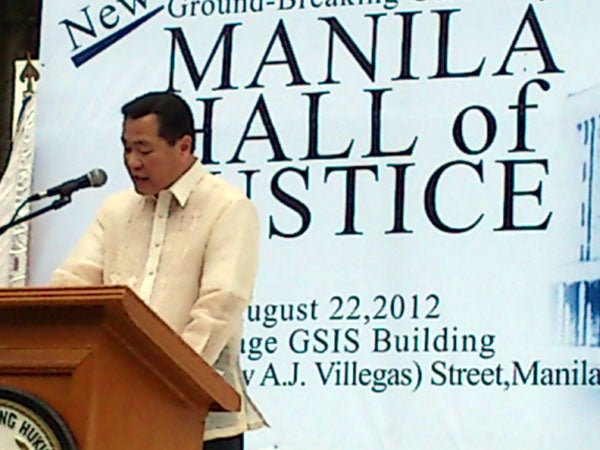 Acting CJ Antonio Carpio assured that construction of the P1.8b Manila Hall of justice will push through. Tetch Torres/INQUIRER.net

MANILA, Philipines—Acting Chief Justice Antonio Carpio on Wednesday presided over the latest groundbreaking for the P1.865-billion Manila Hall of Justice at the old Government Service Insurance System (GSIS) building in Manila, and vowed that its construction would be finished within two to three years.

The Wednesday groundbreaking was the eighth one held for the Manila Hall of Justice, and Carpio made the assurance that it would be the last.

“I assure you, as the sun will rise tomorrow, the Manila Hall of Justice will rise on this site,” Carpio said in his speech at the site, located at the corner of Gat. Antonio Villegas and Concepcion Aguila streets in Manila.

Carpio noted that the delay in the construction of the Manila Hall of Justice was due to the non-availability of either land or money, or both.

“During the last groundbreaking in 2005, there was land but there was no money,” Carpio said.

The site of the Manila Hall of Justice was moved several times from the old Jai-Alai Building along Taft Avenue to the old GSIS Building.

Manila Mayor Alfredo Lim said he was hopeful that the construction would finally push through.

He lauded Carpio for pushing for the project, saying many Chief Justices had made the promise but that only an acting chief justice would make it a reality.

“Many Chief Justices tried to build our dream but to no avail. Salamat dumating si acting Chief Justice Carpio. With him around, we believe that there will be no glitches,” Lim said, at the same time expressing the hope that Carpio would become the next Chief Justice.

The high court has allocated P1.865 billion for the construction of the Manila Hall of Justice, which house  120 regional and metropolitan trial courts.

The construction of the Manila Hall of Justice has been a plan since early 2000 but was shelved several times for lack of budget. In 2010, the high court requested P3billion from the Department of Budget and Management but was turned down.

The Halls of Justice are buildings constructed under the Justice System Infrastructure Program (JUSIP), an offshoot of Administrative Order No. 99 issued in 1988 by then President Corazon C. Aquino.

Under the JUSIP, courthouses shall be rehabilitated or constructed for the use or occupancy of the lower courts, the National Prosecution Services, the Parole and Probation Administration, the Public Attorneys’ Office, and the Register of Deeds.

In November 1999, the Committee on Halls of Justice (CHOJ) was created to assist the Court in the administration and maintenance of the halls located all over the country.