Commission on Appointments scrambles to honor Robredo in death 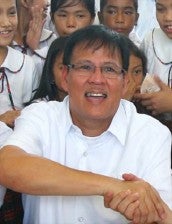 Interior Secretary Jesse Robredo, who earned near universal words of praise from a nation also mourning his untimely death, came so close to finally getting confirmation as head of the Department of the Interior and Local Government (DILG) from the Commission on Appointments (CA) two years after he joined the Aquino administration.

Robredo was supposed to be confirmed on Aug. 15, but this was postponed in deference to the necrological services for another Bicolano, Sorsogon Rep. Salvador Escudero, who died from cancer, commission members Roilo Golez and Antonio Alvarez said Tuesday.

Robredo’s confirmation was rescheduled for Aug. 29, according to Alagad Rep. Rodanto Marcoleta, another member of the commission. Marcoleta said he had expected the confirmation to pass without a hitch.

Both Representatives Marcoleta and Golez said they had talked to Robredo the week before and had assured him of the commission’s support.

“We were deprived the honor of confirming a great man, one of the best in the Cabinet,” Golez, a Parañaque representative, said in a text message. “His place in the history of public service is secure.”

But it still took two years before the confirmation of Robredo, a multiawarded and publicly extolled government official, could be scheduled.

An objection from Camarines Sur Rep. Luis R. Villafuerte, an uncle of Robredo who had a falling out with his nephew, was believed to be the reason for the latter not being confirmed by the CA.

A disqualification complaint against Robredo in the Commission on Elections was revived when he ran for mayor in 2007. He was then running against administration candidate Jojo Villafuerte, also a nephew of the congressman.

Recently, Villafuerte apparently had a change of heart.

In a statement, Villafuerte said there was already an agreement to confirm Robredo.

He said a hearing of the committee on interior and local government of the Commission on Appointments was, in fact, scheduled for Aug. 14.

“I would be nominating Interior and Local Government Secretary Jesse Robredo, which would then be seconded by Sen. Loren Legarda. This was in coordination with the Liberal Party senators, specifically Sen. Franklin Drilon, and this can be verified with him,” Villafuerte said.

“Unfortunately, we, the members of the House delegation to the Commission on Appointments, had to attend the necrological services in honor of our colleague, the late Sorsogon Rep. Salvador Escudero,” he added.

He said this prompted Golez, the head of the House delegation, to request a postponement of the committee hearing.

He said Robredo had been doing a good job as interior and local government secretary and was one of the most hardworking members of President Benigno Aquino’s Cabinet.

“He would have continued to perform well if not for this tragic turn of events,” Villafuerte said.

“We, his province mates in Camarines Sur and his fellow Bicolanos, are very saddened about his death as it is a big loss not only for us but for the whole nation,” Villafuerte said.

At La Salle Green Hills in Mandaluyong City where a morning Mass for Robredo was held yesterday, Sen. Franklin Drilon confirmed reports that the former was finally supposed to get the confirmation as secretary of the DILG from the Commission on Appointments on Wednesday.

Drilon was emotional when asked to recall any of his experiences with Robredo, a fellow member in the Liberal Party (LP).

The senator recalled how he and LP members would meet every Wednesday at 7 a.m. to discuss ways to strengthen the party, and how the late interior secretary would seem to have the solution to every problem.

“(I will miss) his capability to talk to anyone. His credibility, his laughter, his jokes,” Drilon said, teary-eyed.

“But at least he left with the thought that he would have been confirmed because he deserved to be (secretary of the DILG),” he added.

Sen. Vicente Sotto III, the Senate Majority Floor Leader and the chairman of the bicameral body’s committee on interior and local government, said local politics in Camarines Sur played a role in Robredo not being confirmed.

Sotto said it was agreed upon that Robredo first resolve political issues with Villafuerte and Camarines Sur Gov. Luis Raymund Villafuerte Jr. before facing the committee.

Legarda said the entire Nationalist People’s Coalition (NPC), including the elder Villafuerte, would have supported Robredo when his turn at the CA came.

Asked if Robredo would have been confirmed, Sen. Loren Legarda, a member of the bicameral panel, said, “Yes, because the whole NPC will support him.

Legarda said Robredo had breakfast with her and members of the NPC at her home on Saturday morning before his fateful trip to Cebu.

She said she had expected Robredo to be confirmed on Aug. 29 with her sponsorship and the NPC lawmakers’ support.

“It was a warm and very light meet. I think he left my home a very happy man, looking forward to his confirmation,” Legarda said in a text message.