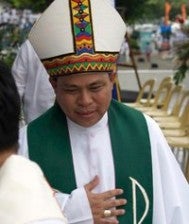 DAVAO CITY, Philippines—Tributes for the late Interior and Local Government Secretary Jesse Robredo poured out from various places in Mindanao Tuesday morning as soon as official word came in that his body had been recovered from the wreckage of a plane that crashed into the sea off Masbate late Saturday afternoon.

All over Davao del Sur flags were lowered to half staff, and officials attending a peace and order council meeting that Robredo had been scheduled to attend Tuesday fell silent and offered prayers for him when news arrived that his body had been found.

“His heart was always for the people,” Jumoad said.

Robredo was supposed to fly to Basilan Tuesday to attend the provincial peace and order council meeting, which was aimed at tackling the recent wave violence in the province, including attacks by suspected Abu Sayyaf bandits on rubber plantations.

When news that Robredo’s body had been found, officials attending the council meeting, including civil society members, offered special prayers for the late interior secretary.

“I am very sad because Sec Jesse is gone,” Jumoad said.

Jumoad said Robredo was quick to contact him whenever he said something strong about the deteriorating peace and order situation in Basilan.

“He was really very approachable and he always responded once you sent him a message or called him,” he said.

“Secretary Jesse is one government official who was always around for everyone,” Jumoad added.

Acting Governor  Mujiv Hataman of the Autonomous Region in Muslim Mindanao described Robredo as a  reformist.

“He was very consistent in supporting the reform initiatives and played a crucial role in uniting ARMM leaders,” he said.

Lanao del Sur Gov. Mamintal Adiong said “Jesse was one of the most decent public servants this country has ever produced.”

“He’s very amiable. We could easily take up with him any problem affecting my province,” Adiong said of Robredo, who was his fraternity brother in the Alpha Phi Omega.

“He was a gentleman, level-headed, unassuming and a very competent public servant,” Sulu Gov.  Abdusakur Tan said in a text message.

In Cotabato City, a misty-eyed Maguindanao Gov. Esmael Mangudadatu said he would have wished that Robredo was found alive but “Allah has His ways.”

He described Robredo as “a dear friend to us.”

“We would have wanted to see him back but we put our trust and faith in Allah,” Mangudadatu said.

In Digos City, Davao del Sur Gov. Douglas Cagas said he could not understand “why good men die ahead of the bad ones.”

Cagas, who regarded Robredo as a good friend since 1986, said the secretary’s death was big loss, not only to the government, but the nation as a whole.

In Bansalan, also in Davao del Sur, Senior Inspector Milgrace Driz said Robredo was the epitome of a true leader.

“He died with dignity and honor as a devoted public servant,” she said.

Digos City local government officer Debbie Torres broke into tears on news of Robredo’s death and could not utter a word for a while. “He was not only our boss, he was our father,” Torres said a while later.

“He always walked the talk,” he said.

Senior Superintendent Ronaldo Llanera, Davao del Sur police director, said he did not expect Robredo would be found alive given the length of time since the crash. But still the news came as a shock.

“It was already expected but the confirmation of his death still triggered sad emotions in us,” he said.

Mayor Joel Ray Lopez of Sta. Cruz town said Robredo was one official who was very serious about the fight against corruption.

“He really encouraged us to implement good housekeeping in government service. He is a great loss for us, knowing that he is really dedicated in his anti-corruption campaign. We are saddened by his death,” Lopez said.

All over Davao del Sur, the flag was lowered at half staff when  Robredo’s death was confirmed.—Reports from Julie Alipala, Charlie Señase, Edwin Fernandez and Orlando Dinoy, Inquirer Mindanao