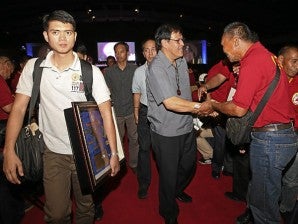 “The body has indications that it belongs to Sec. Jess,” said Roxas as he tried to fight off tears.

The remains of the Department of Interior and Local Government chief has been pulled from the fuselage and brought by rubber boat to one of Philippine Coast Guard’s vessels. It is now on its way to Naga City, Roxas said.

Recovery was difficult as the fuselage had overturned but operations continued to retrieve the bodies of the two pilots who were found inside the Piper Seneca plane. “Nakasubsob ‘yung dalawang piloto sa loob ng cockpit kaya si Sec. Jesse ang unang nakuha ng diver (The two pilots were inside the cockpit that’s why they recovered Sec. Jesse’s body first),” said Roxas.

President Benigno Aquino III has been told about the development and has personally informed the DILG chief’s wife, lawyer Leni Robredo.

Roxas asked the media and the public to give the Robredo family time to cope with what has happened. He also told them not to disrupt forensic experts who will be examining the bodies.

The official confirmation came after four days of massive search and rescue operations headed no less by President Aquino.  With a report from Jonas Soltes, Inquirer Southern Luzon