Oh no, another case of plagiarism? 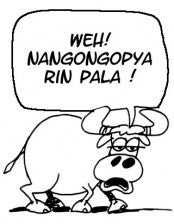 Has plagiarism gripped the Senate?

Days after bloggers accused Senate Majority Leader Vicente Sotto of allegedly quoting at least one source in his speech against contraceptives without proper attribution, netizens blasted his nemesis, Sen. Pia Cayetano, for the same offense.

Cayetano, the chairperson of the Senate women and family relations committee, stands accused of copying sentences without saying they came from reports of the Department of Health (DOH) and the United Nations Environment Program (Unep) in her speeches.

It could be awkward for Cayetano, principal sponsor of the reproductive health (RH) bill in the Senate, to be placed in the same class as Sotto.

US-based blogger Sarah Pope called Sotto a “lying thief” for purportedly lifting statements from her blog that reported on the writings of Dr. Natasha Campbell-McBride against contraceptives. Sotto’s staff was said to have used parts of the Pope blog referring to McBride’s position in the senator’s speech against the RH bill last week.

A group calling itself Pinoy Templars twitted Cayetano in its blog for joining Sotto’s hecklers when she herself has “at least two” privilege speeches that allegedly contain “paragraphs apparently lifted from sources available online—with no attribution whatsoever.”

In a message posted by one Elisa Sangalang, the group apparently believes Cayetano can do better than follow Sotto’s steps since she is “no graduate of Wanbol University”—the fictitious institution where Sotto’s television character, Tito Escalera, failed to earn a degree despite a long residency.

The Philippine Daily Inquirer attempted to get a comment from Cayetano, but her staff said the senator was out of the country.

The original Knights Templar were Christian military soldiers based in Europe during the Middle Ages who had a deep and mysterious history tied to the Crusades and the Catholic Church.

Their local contemporaries appear to maintain the same level of vigilance.

The Pinoy Templars mentioned a February 2011 speech Cayetano gave on “The Status of the Philippines in Achieving the Millennium Development Goals” in which she said that “most mothers prefer to give birth at home with the assistance of traditional birth attendants.”

Cayetano said the preference “becomes a problem since where mothers and newborns are distanced from life-saving interventions provided in health facilities by health professionals during intrapartum period, maternal and neonatal deaths are high.”

She added that mothers “do not routinely choose to deliver in health facilities and avail (themselves) of professional services due to several barriers, such as (1) hostile hospital system, (2) poor interpersonal skills of staff, and (3) financial, physical, social and cultural constraints.”

The Pinoy Templars said a “quick search” on the Internet showed that Health Undersecretary Mario Villaverde in April 2008 gave a PowerPoint presentation in the 7th National Health Sector Meeting where his piece, “Accelerating a Unified Strategy to Save Mothers, Newborns and Children” had basically the same message and the same wording.

The group also noted that Cayetano delivered a more recent speech on World Environment Day quoting “a crucial paragraph” from the website of Unep with “nary an attribution.”

A portion of Cayetano’s speech during the event said: “Practically speaking, a green economy is one whose growth in income and employment is driven by public and private investments that reduce carbon emissions and pollution, enhance energy and resource efficiency, and prevent the loss of biodiversity and ecosystem services.”

To which the Pinoy Templars retorted: “Practically speaking, this is plagiarism.”

The group then posted an image taken from the Unep website where the quote that Cayetano read originally appeared.

The Pinoy Templars described Cayetano as “a highly educated lawyer who built a political career out of her late father’s popularity.” Sen. Rene Cayetano died before his daughter was elected to her first term in 2004.

“Senator Pia’s apparent plagiarism could probably be excused as a mere oversight at most or a careless mistake at the very least. But a woman of her stature and pedigree is definitely way beyond a mistake that could very well have been committed by an elementary pupil or a reckless high school student submitting a plagiarized term paper,” they noted.

“Pia, graceful and fiery at age 46 … is a product of the UP College of Law, who graduated with ‘academic distinction (No. 7), in her class,’ and was a member of the Honor Society, Order of the Purple Feather,” the Templars added.