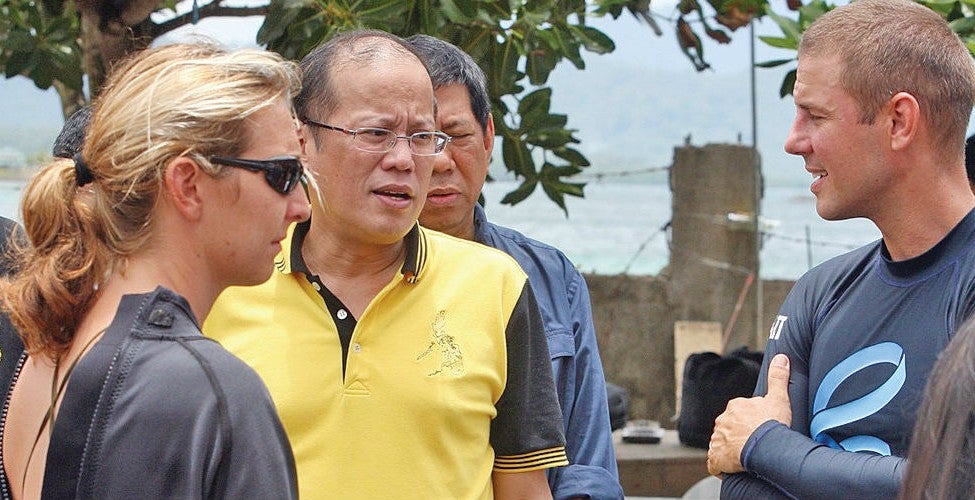 MASBATE CITY—A pillow used by Interior Secretary Jesse Robredo was dropped on Sunday at the site where his plane went down, in the hope it would help in the efforts to find him.

The search area was expanded Monday with foreign dive instructors joining 300 military and civilian rescuers looking for the wreckage of the light plane that crashed at Masbate Pass on Saturday with Robredo and three others on board.

Dropping the pillow in the crash site was in accordance with folk belief that if a pillow used by a missing person is dropped in the place where that person disappeared, that person will resurface, according to Naga City Councilor Elizabeth Labadia.

Labadia, who was with the group from Robredo’s hometown that flew to Masbate City on Sunday morning from Legaspi City in Albay, brought the pillow to be dropped in the crash site.

She said the pillow was given to her by Robredo’s wife, Leni, who chose to stay at the family home in Naga City with their three young daughters and other family members and close friends to wait for news about her missing husband.

Labadia said the pillow was dropped in the crash site, about a kilometer from the shore, around 10 a.m. Sunday by Paul Cabug, a security aide of Robredo, who went there on a flat boat.

President Benigno Aquino, who was leading the efforts to find the wreckage of the plane, traveled to Naga City Monday to brief Robredo’s wife on the developments in the search.

Mr. Aquino had been in Masbate City since early Sunday, personally overseeing the search for Robredo, whom the President refused to give up as dead, presidential spokesperson Edwin Lacierda told reporters in Malacañang.

Lacierda said Mr. Aquino’s departure from Masbate should not be seen as “an indication of anything.”

“[The President] will personally brief Leni Robredo on the search and rescue operations in Masbate,” Lacierda said. “It does not imply any change at this point,” he added.

Lacierda said Mr. Aquino was returning to Manila by nightfall, but the search for Robredo remained a priority for the President despite his departure from Masbate.

Lacierda denied claims that the Aquino administration had stood still since Robredo went missing on Saturday.

He said Mr. Aquino managed to lead the search operations in Masbate because of the long weekend brought on by the Muslim holiday of Eid’l Fitr Monday and Tuesday’s observation of the 29th anniversary of the death of the President’s father, Sen. Benigno S. Aquino Jr.

“A number of us who are Cabinet officials are still working and the President is in touch with all his Cabinet officials,” Lacierda said. “So let me assure the public that the business of governance continues and there is no effect as to government functioning,” he said.

All agencies under Robredo’s agency, the Department of the Interior and Local Government (DILG), are all functioning, Lacierda said.

There had been talk since Sunday that Mr. Aquino had vowed to stay in Masbate until Robredo’s body was found.

When asked about it, Lacierda said Mr. Aquino wanted to be sure that the search was going on and that he hoped for a “resolution.” But the question of staying in Masbate was “going to be a day-to-day decision,” Lacierda said.

“At the moment, however, it all depends on the assessment,” Lacierda said. “There is a dive that is [going on] right now,” he added.

Transportation Secretary Manuel Roxas, designated spokesperson for the search, told reporters in Masbate Monday that foreign technical divers who could dive to depths up to 250 meters had joined the operation. The technical divers were mostly Americans based on Malapascua Island in Cebu.

The search covers a distance of 1 km to 2 km from the coastline of Masbate City, with a depth of 45 meters to 80 meters, Roxas said.

He said the search area was extended by 55 km from the Masbate coast—almost the same length as the western coast of Ticao Island, which lies parallel to the coastline of Masbate Island.

Roxas said the divers were concentrating on an area where the plane’s flight manifest was found on Sunday and where sonar equipment had detected metallic objects.

The place is dangerous, Roxas said, as 200 meters from it is a ravine about 300 meters deep—impossible for divers to reach.

Roxas said the current was very strong in the area where evidence of a wreckage was found Sunday.

“Probably the wreckage on the seafloor is being tossed [around] by the current,” he said.

On Sunday, rescuers found a portion of the right wing of the plane and a copy of the flight plan underwater in that area, where what appeared to be skid marks and metal parts on the seafloor were detected by sonar equipment.

The technical divers went to that spot Monday and found the supposed skid marks at a depth of 60 meters.

At his last press briefing at 6 p.m., Roxas said it was doubtful that the skid marks were made by the plane’s wreckage because they were “very regular and perpendicular” to the debris found in the area.

He said debris found in the area, which was about 100 meters in diameter, included plastic, glass parts and forks and spoons.

It was not certain, however, whether the debris came from the wreckage of the plane, Roxas said.

A British diver took video pictures of the skid marks and the debris, he said.

A team of analysts from the Navy and the Coast Guard was examining the debris, he added.

The four-seat Piper Seneca carrying Robredo to Naga City from Cebu City crashed in Masbate Pass as it was attempting an emergency landing around 5 p.m. on Saturday.

Missing, besides Robredo, are the pilot, Capt. Jessup Bahanting, owner of the plane and CEO of Aviatour Air in Cebu, and Nepalese copilot Kshitiz Chand.

Roxas said in a radio interview on Sunday that Abrasado was helping the search for the wreckage from his hospital bed by describing where and how the plane went down.

Abrasado was bruised and his arms were in slings. President Aquino visited him in the hospital, Roxas said.

In the chaotic moment before the plane went down, Abrasado embraced Robredo and made sure their seatbelts were on, Roxas said, narrating the bodyguard’s description of the plane’s last minutes.

“When he regained consciousness, he was still in the plane. The water had risen up to his chest in the cabin and he tried to grope for Secretary Robredo but could not find him. He swam out of the cabin,” Roxas said.

As head of the DILG, Robredo, 54, was in control of the 143,000-strong Philippine National Police. He was popular with the public because the reforms he introduced in the police and in the local governments.

In recent months, he had ordered investigations into alleged financial irregularities involving construction of police stations and purchase of helicopters and rescue boats.

Robredo was also playing a key role in the dismantling of private armies allegedly deployed by some powerful provincial governors and city mayors ahead of congressional and local elections next year.

Robredo is a close ally of President Aquino. In 2000, he was presented a Ramon Magsaysay award, Asia’s equivalent of the Nobel prize, for reforms he introduced as mayor of Naga City.

At his home in Naga City, his eldest daughter, Jessica Mae “Aika” Robredo, 24, faced reporters Monday morning and thanked friends and all the people who had been helping to give the family strength since Saturday night.

“It is a big help to us,” Aika said, adding that after three days, the family remained “hopeful” that her father survived the crash. She said, however, that the family was also “realistic,” and appealed for prayers.

In God she trusts

In Cebu City, the wife of pilot Jessup Bahinting, Margarita Bahinting, on Monday said she entrusted her husband’s fate to God.

Margarita Bahinting said, however, that she continued to hope that her husband would be found alive.

“Nothing is impossible with God,” she said. With reports from Michael Lim Ubac and Kristine Felisse Mangunay in Manila; Jhunnex Napallacan, Inquirer Visayas; AP and AFP