Philippines won’t give up hope on Robredo 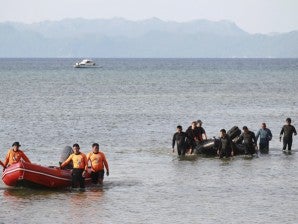 In this photo released by the Malacanang Photo Bureau, rescuers return to shore during a search operation for Interior Secretary Jesse Robredo and two pilots who went missing after their plane crashed into the sea off the waters of Masbate city, Masbate province, central Philippines, Sunday, Aug. 19, 2012.

MANILA, Philippines –Philippine rescuers stepped up the search for Interior Secretary  Jesse Robredo on Monday, two days after he went missing in an airplane crash at sea.

Military helicopters were expanding the areas they were surveying while special divers arrived in the central island of Masbate to help locate the plane of Robredo that crashed on Saturday.

President Benigno Aquino had spent the night on the central island of Masbate to monitor the search for Robredo who is both a key aide and a close personal friend.

However, Transport Secretary Mar Roxas, who is also monitoring the search, conceded, “there has been no positive news”.

“This is still search and rescue. The president has been here all night and he monitored the search to make sure all agencies of government are doing everything they can,” he  said in a television interview from Masbate.

The plane carrying Robredo, an aide and two pilots went down about a kilometer (0.6 miles) from Masbate on Saturday. So far only the aide has been rescued.

Helicopters are now searching a wide area of sea and surrounding islands while special equipment has arrived in Masbate to allow divers to reach a depth of 300 feet (91 metres) where the plane might lie, Roxas said.

“We are hoping we might spot something on an isolated coast somewhere,” he said.

Some wreckage from the plane and even the flight manifest have been recovered from the water but the sea bed is so deep that ordinary scuba divers cannot reach it.

Despite the dimming hopes, the Aquino government is still holding a vigil at a Roman Catholic chapel for Robredo who was an early supporter of the president and a key leader in the government’s reformist program.

As interior secretary, Robredo was in control of the country’s 143,000-strong national police force which has long been dogged by accusations of corruption and abuse.

He also oversaw local government officials including some politicians who use private armies to enforce their will.

In recent months, he had been cracking down on financial irregularities in the police and working to dismantle the private armies ahead of national elections in 2013.

Read Next
Search resumes for Robredo, 2 pilots
EDITORS' PICK
TeaM Energy pushes development programs to help in pandemic rebound
Piolo Pascual: The Ultimate Heartthrob continues to level up
Vaccine supply is ‘biggest problem,’ Binay says after Duterte’s threat to arrest vaccine ‘skeptics’
Pangilinan says science-based solution is needed vs COVID, not fear based or arrest
Want to help local farmers? Shop small and eat Real Food
Vaccine profits: Making a killing from a killer virus
MOST READ
Duterte-Duterte tandem possible but ‘winnability is another question’ — Binay
Vaccine profits: Making a killing from a killer virus
Sharon Cuneta on living in the US: ‘Nagagawa ko lahat ng normal na bagay’
Pangilinan says LP making efforts to reach out to Lacson, Isko, others
Don't miss out on the latest news and information.