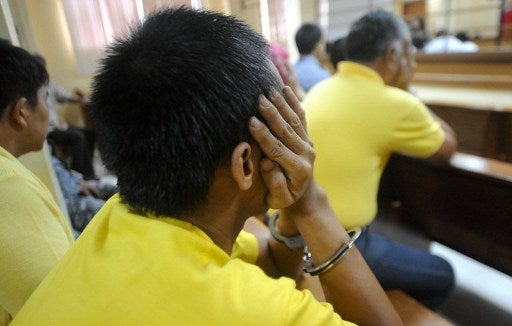 Philippine policemen who are suspects in the Maguindanao massacre attend the trial at a courtroom inside a maximun security prison in Taguig on November 23, 2011. Philippine journalists and activists gathered for an overnight vigil late on Sunday, Aug. 19, 2012, criticizing the slow pace of the trial over a massacre that left 57 people including journalists dead. AFP PHOTO/NOEL CELIS

MANILA, Philippines—Philippine journalists and activists gathered for an overnight vigil late on Sunday, criticizing the slow pace of the trial over a massacre that left 57 people including journalists dead.

The protesters, who assembled at a human rights monument in Manila, also assailed President Benigno Aquino for the continued spate of killings of media workers despite his promises to crack down on such crimes.

About 150 people arrived for a ceremony marking the 1,000th day since the massacre – allegedly by a powerful political clan – said organizer Sonny Fernandez. Thirty-two journalists were among the dead.

“We are remembering the victims, stressing the demand for justice and urging the government to take concrete steps to end the impunity in media killings,” said Fernandez, of the National Union of Journalists of the Philippines (NUJP).

“The Aquino government is not doing much to stop the killings,” he said, citing 13 journalists killed since Aquino took office in 2010.

The 2009 massacre was allegedly carried out by the powerful Ampatuan political clan to prevent a rival from challenging one of their members in elections in the troubled southern Philippines.

However, of 196 suspects in the case, a hundred remain at large while the rest are being tried or face legal processes which have dragged on for months.

Fernandez said that families of the victims were being bribed to drop the case. Other reports say witnesses and potential witnesses live in fear of being silenced.

The NUJP says that since 1986, when democracy was restored to the Philippines, 153 journalists have been killed and only 10 people have been convicted of these killings, with the masterminds going unpunished.

“If the government can show that they can haul to court and punish the mastermind, that will make perpetrators think twice before killing journalists,” said Fernandez.

Human rights and media groups widely blame the killings on a “culture of impunity,” where powerful figures believe they can carry out violent attacks on their critics without being punished.

Read Next
‘Igme’ intensifies into storm
EDITORS' PICK
TeaM Energy pushes development programs to help in pandemic rebound
Piolo Pascual: The Ultimate Heartthrob continues to level up
Vaccine supply is ‘biggest problem,’ Binay says after Duterte’s threat to arrest vaccine ‘skeptics’
Pangilinan says science-based solution is needed vs COVID, not fear based or arrest
Want to help local farmers? Shop small and eat Real Food
Vaccine profits: Making a killing from a killer virus
MOST READ
Duterte-Duterte tandem possible but ‘winnability is another question’ — Binay
Vaccine profits: Making a killing from a killer virus
Sharon Cuneta on living in the US: ‘Nagagawa ko lahat ng normal na bagay’
Pangilinan says LP making efforts to reach out to Lacson, Isko, others
Don't miss out on the latest news and information.