Roxas: We’re doing everything to save Robredo 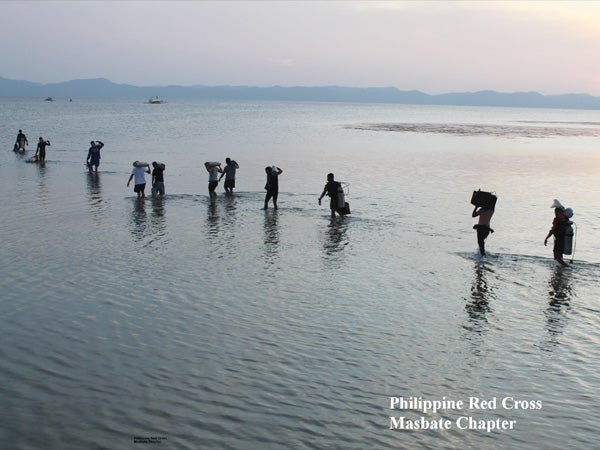 MANILA, Philippines – Helicopters and divers were searching Sunday for one of the most powerful Cabinet members of the Aquino administration, who was missing after a light aircraft he was travelling in crashed into the sea.

President Benigno Aquino took the lead in the search for Interior Secretary Jesse Robredo, a day after his plane went down near the central island of Masbate.

Aquino flew to Masbate where military divers and helicopters were scouring the area for Robredo, who is missing along with two pilots.

Transport Secretary Manuel “Mar” Roxas, who accompanied Aquino, said special sonar equipment had also been flown to Masbate to help in the search operation as divers recovered some debris, including one wing of the missing plane.

“We just want to do everything we can to save him (Robredo),” Roxas said in a message on Twitter.

No sightings of main wreckage

But as night fell Sunday, the main wreckage of the ill-fated twin engine Piper Seneca with RPC 4431, has not been found.

“No sightings, so far,” said Roxas.

Rescuers found a portion of the right wing and a copy of the flight plan underwater in an area where what appeared to be skid marks and metal parts on the seafloor were detected by sonar equipment.

Divers and military aircraft suspended their operations before nightfall but planned to focus their search in that area on Monday, Roxas told reporters, adding that the search by boats would continue through the night.

Four people were on the private plane. Robredo’s aide, June Paolo Abrasado survived with only a few injuries while the Secretary and  two pilots identified as Capt. Jessup Bahinting and Nepalese Kshitiz Chand remained missing.

The Aquino administration has intensified its efforts to find Robredo and the pilots by sending at least 25 sea vessels from the Philippine Coast Guard, the Navy, Air Force, Philippine National Police, and from the local governments.

The Philippine Navy has deployed its naval ships BRP Simeon Castro and BRP Hilario Ruiz and a diving team from the Naval Special Operations Group (Nagsog) to help in surface and underwater search and rescue operations.

At about 3 p.m. Sunday, a team from the Masbate Bantay-Dagat relayed an initial report to Masbate City Mayor Socrates Tuason and Police Superintendent Rodolfo Abella, the city chief of police, that a large object had been detected lying on the seabed.

But when the Philippine Daily Inquirer sought a confirmation from Roxas by phone, he replied:

“Nothing yet. Some underwater, seabed disturbances of indeterminate origin indicated by sonar.”

The crash site is about 200 meters from the tip of the runway of the Masbate airport, the only airstrip servicing all 21 towns of the island-province of Masbate.

Later in the afternoon, divers recovered the flight plan of the ill-fated plane about 100 feet deep on the seabed of Masbate Bay,  Roxas said.

The document contains the names of Robredo, aide June Abrasado, pilot Captain  Bahinting and Nepalese flight student Chand, who were all onboard the six-seater Piper Seneca when it crashed offshore about three kilometers from the Masbate City airport on Saturday.

Roxas said the flight plan was found by divers on seabed, providing the “first more definitive sign of location.”

“Divers are being deployed to investigate,” he said, adding that helicopters were scouring the coast off Ticao Island and south-southeast coast.

Roxas said that divers from the Philippine Coast Guard, Navy Special Operations Group and Philippine National Police have been using Trimix or Nitrox blend (a mixture of nitrogen and oxygen), which extended the dive/bottom time of divers, compared to using the usual compressed air.

The President himself became the ground commander when he arrived early Sunday to personally oversee the Robredo search.

Roxas described the search and rescue efforts as “air, surface and underwater” operations.

The circumstances of plane crash were unclear. 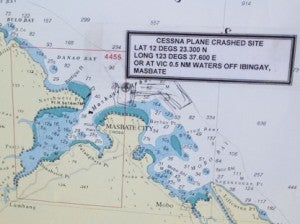 Deputy presidential spokesperson Abigail Valte said in radio interview that Robredo’s aide, Abrasado, had tried to help in the rescue operations in the first few hours following the crash, which authorities said occurred from 4:20 to 4:30 p.m. Saturday.

Abrasado tried but failed to extricate Robredo from the plane after impact.

“I think both Secretary Robredo and Jun Abrasado were able to send (text) messages (before the crash). I think Mr. Abrasado sent it to one of his colleagues that they were having engine trouble and then Secretary Jess sent a message to his wife also on the same subject.

“But … he was not able to … he was trying, I think, to pull out Secretary Jess from the plane but, perhaps, we’ll leave it to Secretary Roxas for the finer details of the story of Jun Abrazado,” said Valte.

The President had visited Abrasado at a Masbate hospital before he was brought to Bicol mainland at noon Sunday.

“Abrasado is in the hospital right now after, I think, he lost consciousness. Because, when he was rescued, they found out that he had a fractured arm. But Jun Abrasado had insisted on going back to the site to help in the search and rescue for Secretary Jess and the other two pilots. So now he is under observation, and the President is back at the center of the site to oversee the search and rescue that is ongoing,” said Valte.

As interior secretary, Robredo was in control of the country’s 143,000-strong national police force which has long been dogged by accusations of corruption and abuse.

In recent months, he had ordered investigations into alleged financial irregularities over the construction of police stations and purchase of helicopters and rescue boats.

Robredo was also playing a key role in the dismantling of private armies allegedly deployed by some powerful provincial governors and city mayors ahead of congressional and local elections in 2013.

A former official at an ice cream company, Robredo was elected mayor of Naga City in the strife-torn Bicol region, south of Manila in 1988 at the age of 29, making him the youngest mayor in the country at the time.

His success in turning the once-sleepy city into a trading, housing and education centre won him many honours including a 2000 Ramon Magsaysay award, considered Asia’s version of the Nobel Prize.

After serving nine years as a city mayor, he joined Aquino’s successful campaign for the presidency in 2010, endorsing his reformist platform. Robredo was subsequently appointed to the Cabinet. With reports from Marlon Ramos and Edralyn Benedicto, Philippine Daily Inquirer; AFP and AP