Why MMDA traffic aide took it on the chin 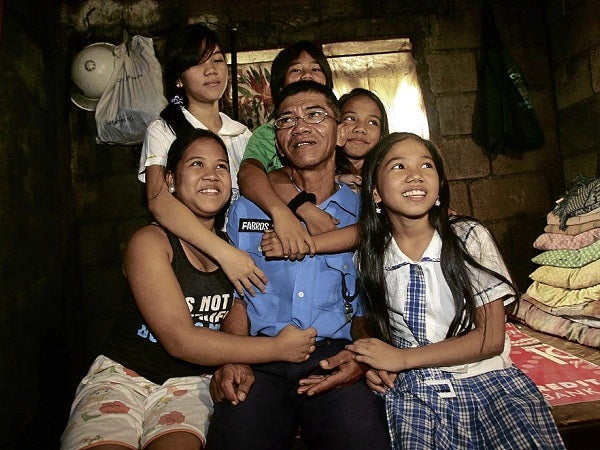 PAPA’S ANGELS. When MMDA traffic aide Saturnino Fabros got slapped around by a motorist, his 6 daughters gave him as many hugs. MARIANNE BERMUDEZ

All Saturnino Fabros could think of when the Volvo-driving manager of a tobacco firm came down from his car and attacked him were his young, motherless daughters.

“What if he had a gun and had shot me? No one would have been left to take care of my daughters,” the 47-year-old traffic aide for the Metropolitan Manila Development Authority (MMDA) said in an interview.

Fabros lost his wife to pneumonia in 2010 and is the sole support of his six daughters, the youngest of whom is 7 years old and a first-grade pupil. The eldest college-age daughter had to forgo schooling because of lack of money.

Fabros was in tears as he recalled the August 11 incident—captured on video by a TV5 researcher—while he was directing traffic at the intersection of Capitol Drive and Tandang Sora Ave. in Quezon City.

After Carabuena’s green Volvo crossed the busy intersection, Fabros gave the car a tap that infuriated the motorist. He saw Carabuena and his brother get out of the car, both of them cursing and swearing at him.

Carabuena removed Fabros’ cap and used it to strike him repeatedly. He then hit the traffic aide in the face.

Fabros said he was stunned at first, which turned to fear when Carabuena went to his vehicle. He thought the motorist was going to get a gun.

“I was just so afraid of what might happen,” he said.

Fabros said it was the first time he experienced violence from a motorist. “Usually, I would just hear curses,” he said.

Public outrage was instantaneous after the video of the assault on Fabros went viral on the Internet.

But more than that, it focused attention on the wretched situation of the traffic aide who takes home a measly P2,300 every two weeks.

Fabros, known to his neighbors as Sonny, lives in a community called Lupang Pangako (Promised Land) in Quezon City. His 25-square-meter house is one of hundreds of shanties made of rusty corrugated sheets and crude hollow blocks surrounding the towering garbage mountain at the Payatas dumpsite.

Once in a while, the foul smell from the dump wafts into his home on a hilly part of Payatas. “We apologize for the smell,” said one of Fabros’ neighbors.

The house is almost bare of furniture, the only appliance being a broken karaoke. Fabros had pawned his television set and had not been able to raise the money to redeem it. The family’s clothes were piled on a table.

The only decor in the Fabros house are the framed photos of the children in their white togas hanging on one wall.

Fabros has to really stretch his tiny salary to partly pay off his debts and the P500 monthly amortization of the house. He can only allot P200 a day for food and other necessities.

“Sometimes it’s still not enough so I have had to borrow money from other people just to get by,” Fabros said. His debts from the MMDA and colleagues have already grown to P45,000.

But the traffic aide, who took on the role of both mother and father to his six children when his wife, Juliet, died in June 2010, is still thankful that he has a regular job.

Before his wife got sick, the couple would scavenge the Payatas dumpsite for empty bottles and tin cans which they would sell to junk shops. For a year, the money they got from scavenging served to augment the income from Fabros’ job.

“We did it on my rest days. But we stopped after my wife died,” he said. Fabros and his children blame the dumpsite for his wife’s fatal lung disease. Juliet was only 37 when she died, he said.

Fabros wakes up at 6 a.m. every day to get his children ready for school, laying out their clothes and preparing their breakfast. He cooks their lunch before he heads off to work.

Jusan, the eldest daughter, cooks Fabros’ dinner before he comes home from his 2 p.m. to 11 p.m. work shift.

His children were “Papa’s girls” even when their mother was alive. “We would always go to him for baon (allowance) and whenever we need something for school,” said Jennifer.

The four younger children each receive a P10 daily allowance and walk the few blocks to  Lupang Pangako Elementary School. The second eldest, a fourth-year high school student, takes a tricycle to  Justice Cecilia Muñoz Palma High School on the other side of Barangay Payatas.

The children said they come home every day to find their lunch all ready. They said they watch out for each other and always go home together so their father would not have to worry about their safety.

Jennifer said Fabros is a good father who would always find a way to give them what they need, even to the extent of borrowing money from his neighbors or colleagues.

During the children’s birthdays and on other special occasions, the father cooks pinakbet or pancit.

Asked if he has gotten over his wife’s death, Fabros said: “Not yet, because raising the kids is so hard without her.”

According to Fabros, the children saw the video of his ordeal at the hands of Carabuena in a neighbor’s TV set and their reactions warmed his heart. “They came to me crying and hugging me,” he said.

“It’s all right, Papa. The people who’ve seen it will help you,” he quoted his children as saying.

Ignacio has started a fund-raising campaign to give the exemplary MMDA officer a grand treat. TV host  Willie Revillame has  invited him to guest in his game show on TV5.

When asked what he would want to happen to Carabuena, the mild-mannered traffic aide said: “I am now leaving it to the authorities.”

The incident also earned him a commendation from his boss. But after 27 years of working for the MMDA, Fabros, a high school graduate of Fort Andres Bonifacio College Annex in Taguig City, has never been promoted.

The only thing that could be considered a promotion was when he was made a traffic enforcer after working for 7 years as a Metro aide whose task was to clean and repaint roads and structures in Metro Manila when the MMDA was called the Metro Manila Commission under the dictator Ferdinand Marcos and Metro Manila Authority under former President Corazon Aquino.

According to Yves Gonzalez of the MMDA’s traffic discipline office,  Fabros, who has a clean record at the MMDA, has been recommended for promotion to traffic aide 2.

“Maybe this time, it will be for real,” said Fabros. He figures that with the prospect of an increase in his monthly salary and the help coming from a lot of people, he might be able to send all of his six children to college.

Fabros’ neighbors said of him that he had always tried to avoid violence and incurring enemies for his daughters’ sake.

“Had that Carabuena known about his situation and what a good father he is, he would not have done that to him. He should come to him and apologize,” said Dominga Resinada who lives just next door.