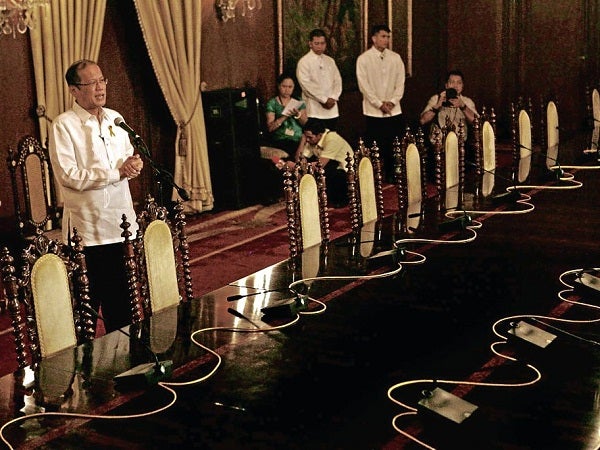 STATE OF DISCONTENT, DISBELIEF President Aquino tells reporters he was not satisfied with the JBC short list of candidates for Chief Justice and the claim of convicted murderer Rolito Go that he was kidnapped. The President made both statements during an impromptu interview at the State Dining Room of Malacañang on Friday. LYN RILLON

“Am I satisfied? Personally, I’m not,” President Benigno Aquino III told reporters, referring to the Judicial and Bar Council list of nominees that did not include the administration candidate, Justice Secretary Leila de Lima.

Nevertheless, the President said he would pick a new Chief Justice from the JBC list before the expiration of the 90-day deadline set by the Constitution. That will be on Aug. 27.

The new Chief Justice will take the place of Renato Corona, who was impeached by the House of Representatives in December for violating the Constitution, and fired by the Senate on May 29 after a four-month trial.

Solicitor General Francis Jardeleza and Securities and Exchange Commission Chair Teresita Herbosa had pending administrative cases when they were nominated for Chief Justice.

Explaining the process after the JBC vote on Monday, Iloilo Rep. Nathaniel Tupas, the House representative to the council, said the panel proceeded to consider Jardeleza’s nomination because the Supreme Court had not yet acted upon the complaint against the solicitor general so it could not yet be considered a pending administrative case.

Tupas said the case against Herbosa was dismissed on Aug. 1, qualifying her for consideration. But as she got only four votes, Tupas said, she landed short of the final list of nominees.

A case for the disbarment of acting Chief Justice Antonio Carpio, also a nominee, was filed just days before the JBC’s final deliberation, but the Supreme Court dismissed the complaint because Carpio can be removed only through impeachment.

The JBC selected nominees who got five or more votes during its final deliberation on Monday. Eight of 20 nominees hurdled the vote requirement.

In spite of his dissatisfaction with the JBC list, Mr. Aquino said he would choose the next Chief Justice from the nominees recommended by the council.

“We will pick from the list before the deadline comes,” Mr. Aquino said.

The President ruled out the idea of sending back the list to the JBC.

“What choice do I have? The Constitution doesn’t give me that prerogative,” he said. “The Constitution tells me that I have to choose from the list that they submitted.”

It was the first time Mr. Aquino spoke about the JBC choices since the council sent the list of nominees to him on Monday afternoon. His press officers had also deferred comment, saying they had yet to speak with the President.

De Lima, who is facing disbarment cases for badmouthing Corona and ignoring a Supreme Court order, complained that she was singled out for disqualification.  She said the cases against her were politically motivated.

Appearing at a press briefing in Malacañang on the reported escape of murder convict Rolito Go from the New Bilibid Prison on Thursday, De Lima said she would not seek a seat on the Supreme Court again.

“I don’t know. Probably not anymore,” she said, responding to questions about another crack at a seat in the highest court.

But she said she would stay in the JBC, as her membership in the council is required by the Constitution.

“[N]o problem with me, I can still work with all of them there,” De Lima said, referring to the other members of the council who opposed her nomination.

‘Fresher’ Rodriguez believes he has the edge vs Donaire