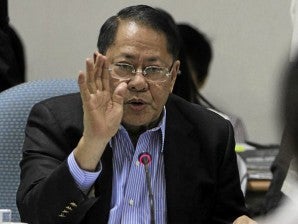 MANILA, Philippines — The Laban ng Demokratikong Pilipino (LDP) party led by Senator Edgardo Angara, is eyeing the formation of an alliance with the administration’s Liberal Party (LP) in preparation for the 2013 national and local elections.

In a press briefing following Laban’s National Executive Council Meeting in Manila on Friday, Angara said that they have been having active talks with LP President Transportation and Communication Secretary Mar Roxas and vice-president Franklin Drilon over the last two to three months.

“The chances are very high,” Angara said when asked if there is a possibility that they will seal the deal with the ruling party, adding that they expect the agreement to be finalized by this month.

When asked if they are satisfied with having only one slot in the LP’s senatorial slate, Angara said: “Yes, we’ll be satisfied. We want more but allocation of slots is very contentious.”

The Nationalista Party led by Senator Manny Villar has already formed an alliance with LP while Danding Cojuanco’s National People’s Coalition is still negotiating with the party.

When asked if this means they have closed the door on the forming of alliance with the United Nationalist Alliance (UNA) led by Vice-President Jejomar Binay and former president Joseph Ejercito Estrada, Angara said: “In effect, parang ganun (it looks like it).”

During Laban’s meeting, the party approved a resolution expressing a vote of confidence in their chairman and president and authorized him to negotiate and enter into coalitions with other parties.

In its resolution, the Laban party said that “party coalitions create a more stable political environment prior to elections.”

However, Angara clarified that the alliance is only for the national level saying that the party’s national leadership does not meddle with local alliances.

Aside from the vote of confidence, Laban also approved a resolution expressing full support for his leadership, and granting him authority to continue reorganizing the party as he deems necessary.