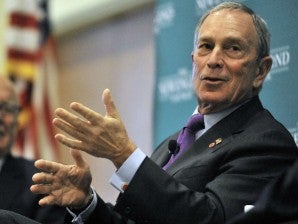 The Quinnipiac University poll found that 54 percent of New Yorkers oppose Bloomberg’s planned prohibition restricting soda drink servings to no more than 16 ounces (almost half a liter). Some 42 percent of respondents backed the measure that could go into effect next year.

The 16-ounce size is more than a normal can, but only half the size of the biggest, bucket-like container that patrons commonly guzzle from in cinemas, sports arenas and other outlets.

There was even more opposition to Bloomberg’s plan to encourage new mothers to nurse their babies by urging hospitals to stop handing them free baby formula.

In the poll, 56 percent of respondents were against the measure, and just 24 percent supported it.

Many US hospitals give away diaper bags to new mothers filled with formula samples, despite concerns that doing so may discourage or hamper breastfeeding.

Critics have charged Bloomberg with trying to turn America’s largest city into a nanny state.

“Voters disagree with Mayor Michael Bloomberg’s push to increase breastfeeding and to limit the size of sugary drinks, but they like the idea of cracking down on alcohol abuse,” said Maurice Carroll, director of the Quinnipiac University Polling Institute.

“Overall, New Yorkers give Hizzoner good grades on public health as they reject the criticism that it’s ‘nanny government’.”

Bloomberg was behind a 2003 smoking ban in bars and restaurants that has since been extended to parks and beaches.

Conducted August 8-12, the telephone poll surveyed 1,298 New York City voters and had a margin of error of plus or minus 2.7 percentage points.