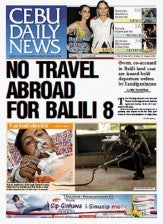 That’s one for each count of graft in a pending case related to the the 2008 purchase of the Balili property in Naga City, where lots were mostly under water.

This means she won’t be able to travel abroad until her arraignment, which has yet to be scheduled.

The freeze order is an inconvenient obstacle for Garcia, who is expected to fly to Rome to attend the canonization rites of Visayan martyr Pedro Calungsod on Oct. 21.

Also included in the hold departure list of the Bureau of Immigration (BI) are her seven co-acccused in the case, which stems from the Cebu provincial government’s purchase of 24.7 hectares of beachfront property now being developed as a coal ash waste landfill. The purchase price was P98.9 million.

In Cebu, Deputy Ombudsman for the Visayas Pelagio Apostol said all eight respondents could not leave the Philippines unless they are arraigned, the stage of a criminal trial where respondents are asked to enter a plea of not guilty or guilty, and the court acquires jurisdicition over them.

“The issuance of a hold departure order is automatic once charges are filed in court,” Apostol said in a phone interview.

He said Garcia and other respondents could avail of probational arraignment in case they need to travel abroad.

“They should subject themselves to arraignment before they can seek permission of the court to leave the country. This is done so that in case they don’t return to the Philippines, the Sandiganbayan already has jurisdiction over them and trial can proceed even without them,” Apostol told Cebu Daily News.

Apostol said respondents can request for a travel authority from the court “every time they want to leave the country” and have to report to the court upon return.

Garcia, who denies there was anything anomalous in the land purchase, said she was “not aware” the property was under water because she relied on the report of the Provincial Appraisal Committee, which omitted a techncial report that described the coastal property as having almost 20 hectares of the 24.7 hectares under water.

The governor said the lots were titled with no sign of defects on the land titles.

Her lawyers are seeking a reinvestigation by the Office of the Ombudsman following Garcia’s indictment on charges of two counts of graft and one count of illegal use of public funds.

The Ombudsman said the land purchase was “grossly disadvantageous” to the government and misused funds from an outlay for “site develoment and housing program” in the 2008 annual budget of the province.

Garcia’s lawyers in the Romulo Mabanta law firm in Makati, including her daughter Christina Esperanza Codilla-Frasco, have asked the Sandiganbayan to suspend any proceedings until the motion for reconsideration/reinvestigation is resolved.

Apostol told CDN a motion for reconsideration may stop the arraignment.

But he said Garcia and the other respondents could not go out of the country unless they will be arraigned.

CDN tried to contact Frasco and Capitol consultant Rory John Sepulveda for comment on their cell phones but calls and a text message were not returned.

Lawyer Caesar Tabo-tabo, counsel of Amparo Balili, said he has no idea yet about the hold departure order.

All respondents posted bail after the criminal cases were filed on July 19.

Businessman Crisologo Saavedra, one of two complainants in the cases, said the hold departure was “better than nothing.”

“I’m not really happy. I want the case to move faster. They (respondents) should be taken out and not be allowed to further commit abuses in their position,” Saavedra told CDN.

Environmental groups were the first to question the land classification of the Balili properties after they raised alarm over plans of the Capitol to to use the estate to dump coal ash waste from power plants as a paid service.

In Aug. 14, 2009, the governor called a press conference and made a public apology for what she called a “fiasco” in the Balili land purchase. She said she was misled about the circumstances of the property purchase by former PB Member Bolo.

Nevertheless, the governor said the Province would continue with its plan to develop the Balili land into an international port and a coal ash storage area as part of its agreement with Korean power producer Kepco-Salcon.

She said the fishponds and wetlands could be reclaimed and titled in the name of the Province of Cebu.