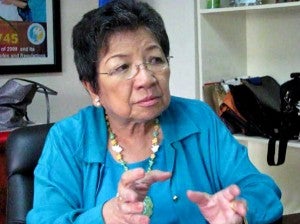 The Commission on Human Rights (CHR) said it had found a pattern of selective and systematic extrajudicial killings of 206 individuals accused or suspected of committing various offenses by a vigilante group in Davao City from 2005 to 2009.

The CHR faulted local officials for failing to conduct any meaningful investigation into the killings, thereby violating the state’s obligation to protect the rights of its citizens.

It said the then city mayor, Rodrigo Duterte, as the local chief executive and deputized Napolcom representative with general and operational control and supervision over the city police force, had clearly disregarded information on alleged human rights violations in Davao City, and did not act on them.

Rosales asked the Office of the Ombudsman to look into Duterte’s administrative and criminal liability for his inaction and for tolerating such violations in his jurisdiction.

“It is axiomatic in human rights law that where there are human rights violations, there must be accountability,” Rosales said.

The CHR investigation was prompted by the search for accountability for the many lives taken arbitrarily by the DDS, a group allegedly responsible for summary executions of delinquents and drug traffickers in Davao.

Rosales said the number of persons killed could even be higher as the 206 figure was only based on what the CHR had in its records.

According to Rosales, dead bodies were piling up in Davao City during that period, consisting mainly of addicts, drug pushers, thieves and young people with police records for petty crimes. Many of the victims were minors.

Then President Gloria Macapagal-Arroyo established the Melo Commission to look into the killings. Official concern from the United Nations came with the visit of Philip Alston, the UN special rapporteur on extrajudicial, summary or arbitrary executions, who visited the country in February 2007.

In his report to the UN Human Rights Council in 2008, Alston observed that “it is a commonplace that a death squad known as the ‘Davao Death Squad’ (DDS) operates in Davao City. One fact points very strongly to the officially sanctioned character of these killings: No one involved covers his face.”

The New York-based Human Rights Watch observed that the DDS  “typically make greater efforts to conceal their weapons than their identity.”

The CHR at the time, then headed by now Justice Secretary Leila de Lima, decided to conduct an investigation into the killings.

The CHR conducted public hearings in Davao City in March, April, May and September 2009.

According to Rosales, the CHR’s investigation was hampered by a climate of fear gripping witnesses and by official denials from local government and law enforcement officials that the Davao Death Squad even existed.

Still, enough evidence emerged that there was a pattern in the victims targeted and in the methods of attack, she said.

“The killings were selective: The victim was usually involved or suspected to have been involved in some type of illegal activity. The manner of killing was also distinct: The assailants were usually motorcycle-riding gunmen,” she said.