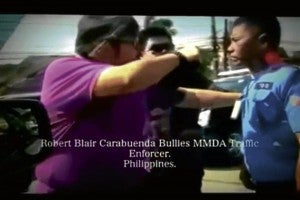 BLOW BY BLOW Video grabs from the web show how motorist Robert Blair Carabuena (left) and brother Robert Benjamin (center) deal with the “cool” Saturnino Fabros, who flagged them down for beating the red light.

A damning video that has gone viral should smoke them out.

A Volvo-driving manager of Philip Morris Fortune Tobacco Corp. and his brother are facing legal action—and growing public outrage—after they were caught on video assaulting a traffic officer of the Metropolitan Manila Development Authority who flagged them down for a violation on Saturday.

The 27-second video showing motorist Robert Blair Carabuena hitting Saturnino Fabros has since spread on social networking sites, drawing condemnation from the MMDA. The Palace also weighed in and praised “vigilant citizens” for the online expose.

According to a Malacañang statement, the online clip was taken by Karen Bernadette Keith, a researcher for the TV5 show “T3.” It showed Carabuena berating and then slapping the officer—who did not fight back—while his brother Robert Benjamin looked on. (See photos on Page A24)

Fabros, who has been with the MMDA for 27 years, reported to his headquarters on Wednesday to execute an affidavit for a complaint of direct assault to be filed against the brothers in the Quezon City prosecutor’s office.

MMDA Chair Francis Tolentino Wednesday said he had also asked the Land Transportation Office to cancel Carabuena’s license, saying “abusive and arrogant motorists like him … have no right to be on the road in the first place.”

“We cannot allow this aggression and shameless attack against our men who are only doing their job as best as they can regardless of the risks they face in the streets every day,” Tolentino said.

The MMDA chief demanded a public apology from Carabuena, an Ateneo de Manila graduate and human resource manager of PMFTC, because “the assault on Fabros is also an attack against the MMDA.”

“As with all of our men who were attacked and intimidated by undisciplined motorists while performing their duties, we will see to it that justice is served to Mr. Fabros,” the MMDA chief said.

In an interview with reporters, Fabros said he tried to apprehend Carabuena after the latter, then driving a green Volvo, beat the red light at the intersection of Capitol Drive and Tandang Sora Avenue in Quezon City.

Catching up with the car after it crossed the busy intersection, Fabros gave it a tap— a move that apparently enraged Carabuena and prompted him and his brother to get off the vehicle.

“He was so angry. He grabbed my cap and hit me several times,” said Fabros, who at one point began to sob as he recalled the encounter to reporters.

He said Carabuena’s brother held his back while Carabuena hit him.

A father of four children, he said he had never been humiliated like that in his 27 years in the MMDA.

“He exhibited the right behavior. He did not fight back and he just kept his cool. He didn’t even utter foul words against the person. That’s what we expect from all our traffic enforcers,” Gonzalez noted.

MMDA lawyer Victor Nunez said traffic enforcers get bullied and assaulted by motorists almost every month. He recalled two instances when the officers were “intentionally hit” by passenger buses, and another in September last year when an MMDA enforcer was shot by an erring motorist.

“The difference now is that we have a strong evidence against the motorist,” Nunez said, referring to the video. 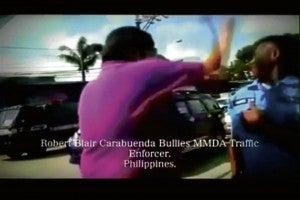 In a statement, PMFTC said: “We are aware of the incident involving our employee Robert Blair Carabuena. The incident happened on Saturday (Aug. 11) and Carabuena was on his personal time and was not doing any work in behalf of the company when the incident took place.”

“While the complete facts surrounding the incident are not yet clear to make a full appreciation of the situation, the company would obviously not condone inappropriate conduct by any of our employees. We understand the matter is being investigated by the authorities and we will monitor developments closely,” the company added.

Presidential spokesperson Edwin Lacierda said “we commend our vigilant citizens who actively seek accountability from individuals in both the public and private sectors.”

Keith’s video, he noted “sparked outrage among our fellow citizens through social media.”

“When people seek out and denounce the abusive, we see our citizens taking an active part in the President’s drive against the ‘wang-wang mentality.’ This is a convergence that directly links individuals, through social and traditional media, to broader efforts to achieve social change.” With a report from Michael Ubac