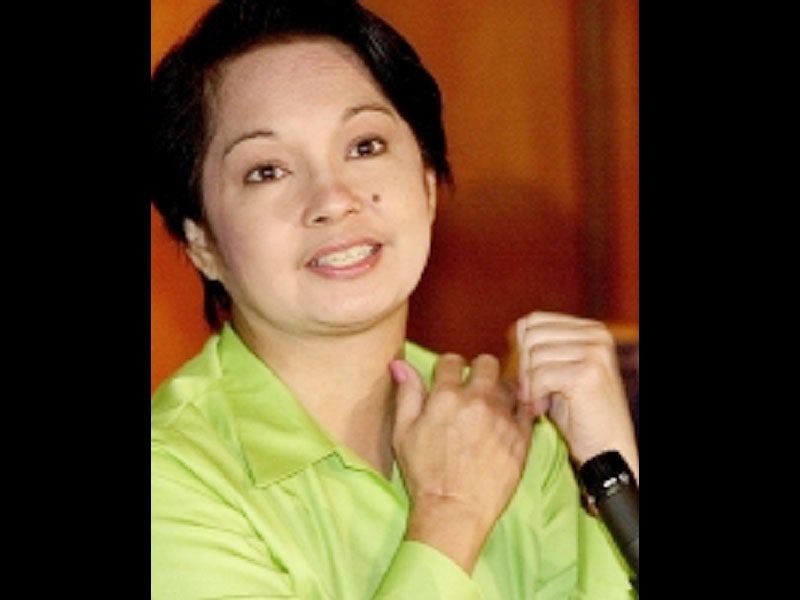 Lawyers have advised former President Gloria Macapagal-Arroyo to keep silent on new charges of election cheating and corruption, describing them as a Palace ploy to lift the declining popularity rating of President Benigno Aquino III.

“We, her legal team, have advised her not to issue any statement on these new charges because her opponents are desperate to get anything that can be used against her in both the legal and political arena,” Raul Lambino said in a phone interview with the Inquirer on Sunday.

Arroyo, now a Pampanga representative, and her husband, Jose Miguel Arroyo, arrived on Saturday from a tour of Europe, but she has yet to comment on the volley of exposés last week by Zaldy Ampatuan and Lintang Bedol. Lambino described Ampatuan and Bedol as Malacañang’s “attack dogs.”

“These charges have been made in contrived interviews and unsigned affidavits. We are waiting for Ampatuan and Bedol to formalize these charges in the proper court so we can make our proper reply. Until then, these are just baseless charges meant to boost the political stock of the President,” Lambino said.

Ampatuan was the governor of the Autonomous Region in Muslim Mindanao (ARMM) who was suspended after he and his family were accused of masterminding the grisly massacre of 58 people in Maguindanao on Nov. 23, 2009.

The three are among 79 people detained in connection with the worst political violence in the nation’s history.

The TV broadcasts were followed by the release of unsigned statements purportedly executed by Zaldy Ampatuan, accusing Arroyo of receiving P200 million in kickbacks from three road projects in the ARMM during her term, and tampering with the senatorial election results in 2007.

On Wednesday, ABS-CBN aired an interview with Bedol, a former election supervisor in Maguindanao who disappeared four years ago, accusing Arroyo of rigging the 2004 presidential election and the 2007 senatorial balloting. Bedol, who has a warrant for his arrest, remains in hiding.

Lambino said the Aquino administration had thrown its resources, along with the help of “powerful private individuals,” behind Ampatuan and Bedol in a fresh wave of attacks against Arroyo just two weeks before Mr. Aquino was scheduled to deliver his State of the Nation Address.

“They are throwing everything at Representative Arroyo and hoping that something will stick. The public is asking why this government is so trusting of someone who has been accused as a mass murderer and another who has been a fugitive for four years. This administration is so desperate, it will lay its entire case on the word of individuals who have no credibility and bear ill motives,” he said.

Lambino also wanted the government to clarify the status of Ampatuan and Bedol as they appear to have been “coddled” by state officials since coming out as Palace “attack dogs.”

“Will they treat him (Ampatuan) as a virtual state witness and allow him to go on hospital detention? Why hasn’t Bedol been arrested when the government has been looking for [him in] the last four years?”

Lambino also said Malacañang’s mouthpieces should stop making “foolish” remarks that the government had nothing to do with Ampatuan’s decision to tell all and Bedol’s sudden emergence from hiding.

“Tell that to the anchovies. They treat the public like small fishes with small brains,” he said.

San Juan City Rep. Joseph Victor Ejercito said the government should issue a hold-departure order against Arroyo and her husband once the charges of Ampatuan and Bedol have reached the Sandiganbayan.

But Arroyo’s ally, Maguindanao Rep. Simeon Datumanong, said a hold-departure order against the former President was premature and unnecessary.

Senate President Juan Ponce Enrile, commenting on the fresh accusations against Arroyo in a radio interview Sunday, said all those involved in poll cheating should be made accountable.

“If there is evidence to warrant their inclusion in a criminal case, we must go even after the generals who were involved, the soldiers, the policemen, even ordinary civilians who allowed themselves to be used. No exceptions,” he said.

Former Speaker Jose de Venecia Jr. said a reinvestigation of the alleged poll irregularities should provide a closure, “otherwise, we will always be living in a cloud [of doubt] and our democracy will always be stained.”

De Venecia, a former ally of Arroyo, was in Pangasinan on Sunday with his wife, Rep. Gina de Venecia, to inaugurate a P20-million public market in Mangaldan town.

He said a “truth commission” should be created to conduct a full-blown probe, but the Senate and House of Representatives could also initiate an investigation, either separately or jointly.