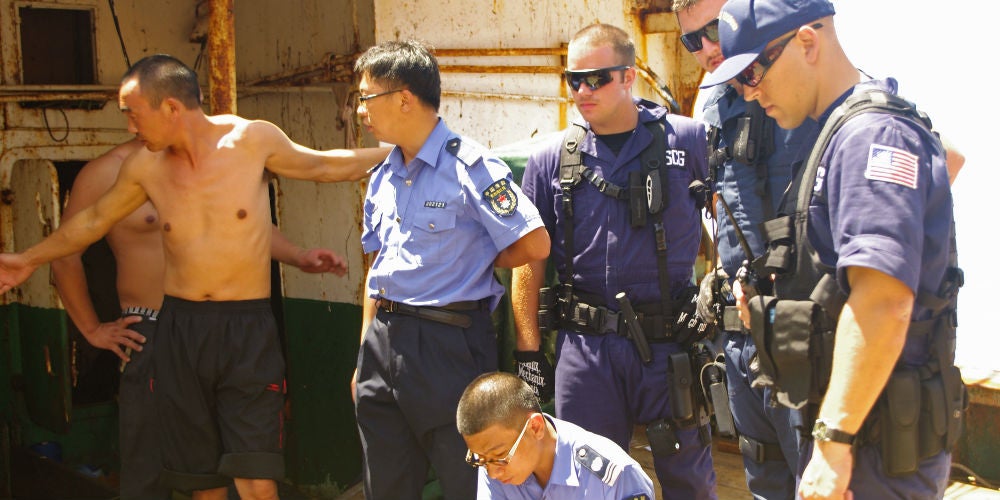 ANCHORAGE, Alaska—A vessel suspected of illegal driftnet fishing on the high seas was transferred to China by the U.S. Coast Guard on Tuesday.

Coast Guard officials said Chinese citizens were operating the vessel, called the Da Cheng. The cutter has since followed the vessel as it moved west, and the vessel was turned over to the China Fishery Law Enforcement Command on Tuesday, officials said.

The Da Cheng crew had been fishing with 10 miles (16 kilometers) of large-scale driftnets, the Coast Guard said. Such snares have been banned internationally since 1992.

“Our Chinese law enforcement partners take the practice of (high seas driftnet) fishing as seriously as we do,” Rear Adm. Thomas Ostebo, commander of the Coast Guard’s 17th District, said in a statement. “I have full faith that they will utilize the most stringent methods possible to prosecute the vessel and its owners.”

Chief Petty Officer Kip Wadlow said the U.S. is a member of the Western and Central Pacific Fisheries Commission, a multinational entity whose members include China, Japan, Australia and France. As a member country, the U.S. is authorized to board vessels suspected of illegal fishing on high seas.

Such suspicions led to the Coast Guard’s boarding of the Da Cheng, Wadlow said.

“In this case, it turned out to be true,” he said.

The crew initially claimed to be from Indonesia, but authorities determined the Da Cheng was actually a stateless vessel, he said. Violations besides the use of illegal driftnet gear include failure to maintain sufficient records and fishing without permit, license or authorization by a sanctioned authority, the Coast Guard said.

Officials say driftnet fishing indiscriminately kills massive amounts of fish and other marine life, such as whales, turtles and sea birds. Officials with the National Oceanic and Atmospheric Administration said this is the only case they know of globally involving high seas driftnet fishing this year.

“This is felt throughout the world, including by our fishermen here in the U.S.,” he said in a statement.