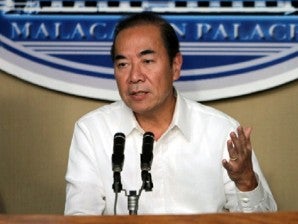 MANILA, Philippines – Public Works Secretary Rogelio Singson said  he is not a violent  person to even think of  blowing  up  squatters’ homes as reported  in the media.

Interviewed over Radyo Inquirer 990AM on Tuesday, Singson clarified that he was referring to  dikes, not the squatters’ homes, when he talked about the government’s plan to “blast” structures  that  were blocking waterways.