Back to reality: Britain bounces back after games 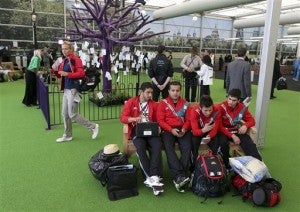 LONDON, Great Britain — Basking in post-Olympic glory, Britain succumbed to reality Monday with commuters venturing back to work and Heathrow Airport bracing for one of its busiest days ever.

Some 116,000 people are expected to leave — an exodus that includes some 6,000 athletes and Prime Minister David Cameron for his long-awaited summer vacation.

“I have so many memories of these games,” said 27-year-old Esther Lofgren, who won gold for the U.S. rowing team. “Getting to see the other athletes competing was just amazing. I got to see Usain Bolt run. And some of the random stuff, like hanging out in the dining hall meeting people from other countries, has just been amazing.”

The special terminal, designed like a London park, was filled with iconic items such as a red telephone box and a double-decker bus. Some Heathrow staff were stationed at a ticket counter wearing bearskin hats, much like the guards at Buckingham Palace.

The special terminal will be decommissioned after three days and will go back to being a staff car park.

“London has staged a fantastic Olympics,” said 33-year-old Chris Brown of the Bahamas who won gold in the men’s 4×400 meter relay.

Heathrow, which deals with about 95,000 passengers a day, was criticized before the Olympics for failing to provide enough staff at immigration points.

But many tourists arriving at Heathrow’s regular terminals Monday were pleasantly surprised.

“Everything has worked very well,” said Sashi Singh, a retired businessman returning to his home in Fiji after coming to London for the games. “I didn’t expect just to whizz through like this. Everyone has been so nice.”

In a telephone call late Sunday, U.S. President Barack Obama praised Cameron on the country’s hosting of the Olympics.

Cameron on Monday praised the nearly 90,000 Olympics volunteers who offered support to visitors.

“The volunteers, members of the armed forces, police and others who worked on the games are the ones who made them possible,” Cameron said.

Traffic also returned to normal Monday — many commuters steered clear of London during the games after a campaign to use public transport.

Some taxi drivers said they were ecstatic that the games were over. During the Olympics, many drivers were banned from using special lanes for athletes and officials.

“It’s been brutal,” said Shafiq Arjaz, a 43-year-old cab driver. “Customers were angry that we couldn’t get them around. A lot of us barely broke even during the games.”

The games, which will be followed by the Paralympics from Aug. 29 to Sept. 9, were hailed as a security success even though private contractor G4S failed to provide enough staff for the games. In the end, the military stepped in and provided some 3,500 personnel to make up for the shortfall.

G4S spokesman Adam Mynott said the company has donated 2.5 million pounds (3.9 million dollars) to the military, which will be then donated to charities.

The donation is in addition to what the company will end up owing the government for the extra manpower. The company expects to make a loss of between 35 and 50 million pounds (54 and 78 million dollars) on the Olympic contract.

Meanwhile, some 250 people were arrested during the games, but there were no terror incidents or disruptive protests.

“I’m very proud that we didn’t have anything serious to deal with, but that was because of a lot of hard work done by a lot of people,” Chris Allison, the Olympics Security Coordinator, told The Associated Press. “The focus has been exactly where we wanted — on the sport and not security.”

But the security operation isn’t over yet, Allison said.

Some 7,000 police officers and some 5,000 G4S workers will be on hand to guard the Paralympics.

The Olympic Park, visited by more than 5 million people over the last 17 days, was eerily deserted Monday.

The main stadium was blocked off by metal barriers, concession stands closed, the world’s biggest McDonald’s empty. Small groups of construction workers scurried about in small vehicles, working to transform the venues for use in the Paralympics.

The park will be closed to the public until then — and for almost a year afterwards, while some venues will be torn down and others modified. It will open in stages from next summer as the 227-hectare (560-acre) Queen Elizabeth Olympic Park.

Park worker Francis Joseph sat atop a lifeguard-style high chair — where volunteers with megaphones directed crowds during the Games — and looked at the empty park with a touch of sadness.

“For two weeks, we saw a lot of people — all of a sudden it just went off, like that,” he said, snapping his fingers.