So what’s in a name? ‘Habagat’ or ‘Hagibis’? | Inquirer News
Close
menu
search 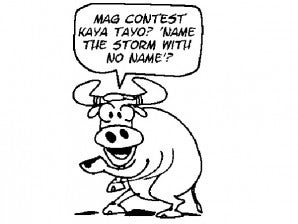 Even President Benigno Aquino III’s deputy spokesperson, Abigail Valte, was stumped on how to call the powerful monsoon rains that triggered massive flooding and cut a wide swath of destruction in the capital and parts of central and southern Luzon.

On Saturday, Valte was explaining government priorities involving the thousands of families now huddled in evacuation centers over a state-run radio, but stopped midway during the interview, at a loss over how to call the cause of last Tuesday’s deluge.

“It’s very difficult when we don’t have a name for it. We’ve started calling it Habagat 2012, but then again…,” she said over Radyo ng Bayan, trailing off. “Please bear with me, I find it difficult [to elaborate] when there’s no name.”

Habagat is the local term for the southwest monsoon that spawned heavy rains over parts of Luzon, including the metropolis, for close to two weeks, coming to a head last Tuesday.

It has left at least 77 people dead and P1 billion in damage to agriculture in one region alone, officials said.

Valte said the government would focus on providing relief to flood victims now sheltered in public schools or gyms in the capital and parts of central and southern Luzon before planning their resettlement.

“After the relief, evacuation and resettlement phase, we can evaluate what is needed to adopt medium- or long-term solutions,” she said, when asked what instructions President Aquino has given Vice President Jejomar Binay.

Besides, she said, the President has earlier ordered the release of P10 billion for the relocation of informal settlers from “dangerous areas” to safer housing communities.

And before undertaking the megabuck infrastructure projects to address flooding in the devastated areas, the government should fix the potholes first, and the public could contribute to this.

“Now that the floods are subsiding, the public is complaining about the potholes. So we’re asking the help of concerned citizens that if you spot potholes, take pictures and send them to us via Twitter,” Valte said.

The Presidential Communications Development and Strategic Planning Office (PCDSPO) teamed up with the Department of Public Works and Highways to receive complaints about potholes on national roads, and dispatch personnel to fix these.

Valte also warned the public against hoarding and against businessmen unduly raising prices of commodities. She said energy officials have given assurance that there was a sufficient supply of the cooking gas, liquefied petroleum gas (LPG).

“If you go to the supermarkets and hoard noodles, others will think there’s a shortage and they’ll scramble to buy these products. We don’t have a supply shortage of the basic commodities,” she said.