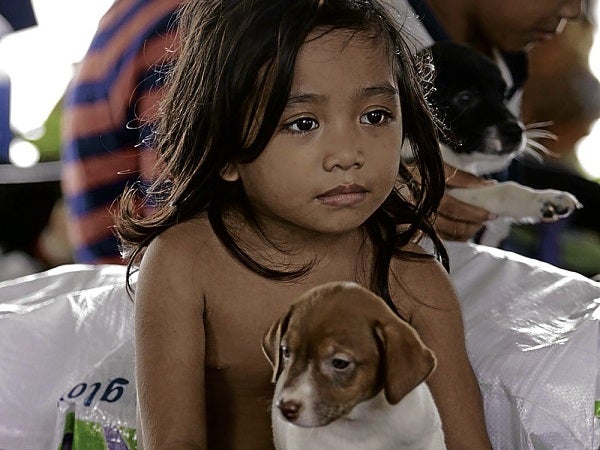 BEHOLD THE CHILD. Alexis Joy Preclaro, 4, with the forlorn look stays close to her puppy at an evacuation center in Taytay. PAT ROQUE/AP

MANILA, Philippines—The Senate committee on climate change has scheduled a public hearing this week to find out how the government has been implementing environmental laws after the massive flooding in Metro Manila and outlying provinces from the unprecedented amount of rain brought on by an enhanced southwest monsoon.

Officials from the public works and highways, science and technology, environment and natural resources, and social welfare and development departments, and the Metropolitan Manila Development Authority will be invited, said Sen. Loren Legarda, who chairs the committee.

“This is not to blame anybody but to find out solutions [and] how the laws are being implemented,” Legarda said.

“This is not an attack on [President Aquino].  I know he’s doing his best,” she added.

But she said there was a need for a stricter implementation of laws like the Solid Waste Management Act based on the sad experience last week of communities located downstream of the waterways that again suffered massive flooding.

“Residents downstream cannot suffer just because those upstream do not segregate their trash,” Legarda said, citing the huge volume of plastic and other nonbiodegradables found in the waterways.

Legarda also cited the failure of government agencies to either evacuate or permanently relocate residents in geohazard areas when laws on housing and urban development, and national disaster risk reduction and management have already addressed the issue.

“I cannot accept that the poor would be blamed for being stubborn. The message should be communicated simply and clearly. You’d die in that place if you stay there,” she said.

Legarda called for preparedness beyond having relief goods ready when disaster strikes.

No to culture of response

“It can’t be a culture of response,” as such a system is “costly and deadly,” she said.

“It is imperative for the government to submit to the discipline of disaster and climate risk-sensitive development planning,” she said.

Legarda on Friday called for the budget for flood control infrastructure and water resource management to be increased.

She said the national government budget for 2013 must anticipate and should withstand the impact and economic stress brought about by stronger typhoons, heavier rains, prolonged droughts and other extreme weather events.

In the wake of last week’s calamity, there is a need for an effective and enduring solution to the flood problem, Legarda said.

“We have to always ensure that esteros, waterways and drainages are not clogged with waste materials,” she said.

“Moreover, we must educate Filipinos on the importance of waste segregation and provide effective waste disposal methods because government agencies won’t be able to shoulder all the responsibility,” she added.