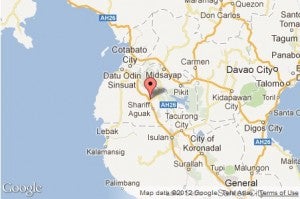 But the authorities were restricting use of the highway after sundown.

The Regional Disaster Risk Reduction Management Council in the Autonomous Region in Muslim Mindanao said the reopening of the highway meant that relief operations could not go full-swing to assist some 33,000 individuals who fled the violence that started Sunday.

At around 11:30 a.m. on Friday, Colonel Mayoralgo dela Cruz, commander of the 1st Mechanized Infantry Brigade, and Senior Superintendent Marcelo Pintac, Maguindanao police chief, led soldiers and policemen in crossing a section of the highway in the villages of Iginagampong, Meta and Maitumaeg, all in Datu Unsay town, to symbolize the road’s full opening to traffic.

“We have enough forces serving as road security,” Dela Cruz said when asked about the safety of travelers on the Maguindanao-General Santos City Highway. He added, however, that the military would only allow use of the highway only during daytime.

“As part of precautionary measures, the highway will be closed to traffic from 6 p.m. to 6 a.m.,” he said.

Dela Cruz said the military’s retaking of the highway came after fierce fighting that on Wednesday and Thursday that, according to him, left 20 BIFF guerrillas dead.

“We based the casualty figure of BIFF to body counts by our troops and civilians in areas where they were buried by their comrades,” he said.

“We could not decide yet if it is already safe for the evacuees to return to these cleared areas,” he said.

In North Cotabato, the military also announced that a section of the Davao-Cotabato Highway between Midsayap and Pikit towns had been sealed off to avoid civilians from being victimized by BIFF forces.

Colonel Roy Galido, chief of the Army’s 40th Infantry Battalion, said soldiers remained on alert for a possible spillover of the Maguindanao clashes into North Cotabato towns bordering on Maguindanao.

Read Next
MMDA exempts groups conducting relief ops from truck ban, number coding
EDITORS' PICK
Heads may roll at BOC, says Palace if sugar smugglers are allowed to use recycled import permits
What to watch out for when selecting a video surveillance solution
Apple warns of flaw that lets hackers into iPhones, Macs
House energy committee chair Arroyo bats for cheap electricity
46% of schools nationwide to have full face-to-face classes on Aug. 22
vivo brings to the Philippines a powerful smartphone with a slimmer body, the vivo Y02s for only PHP 6,499
MOST READ
DepEd to give teachers P5K cash allowance within first week of classes
LOOK: Miel Pangilinan dazzles in glittery pre-debut shoot
Man abducted in Batangas gasoline station, found dead in Quezon
Dressing the dead: Indonesian villagers clean corpses in afterlife ritual
Don't miss out on the latest news and information.