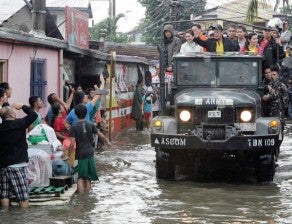 “Electioneering in the midst of disaster.”

Facebook user Rolando Luzong posted this line on his account to describe a photo of a waving President Benigno Aquino aboard an Army truck alongside his potential senatorial candidates in a relief operation to help flood victims in Muntinlupa City.

Aurora Representative Juan Edgardo Angara, Villanueva and Hontiveros were also seen with the President visiting flood victims who had sought shelter at a public school in Nangka, Marikina, and riding an Army truck with him to check on flooded areas in the same village.

These politicians drew criticism in cyberspace for allegedly trying to bolster their popularity for next year’s elections by distributing relief goods, including repackaged ones that contained their names and photographs.

Mr. Aquino, who motored for four to five hours to visit evacuation centers in four cities and a town in the capital, justified their presence.

“Of course, those helping us—Joel Villanueva, Risa Hontiveros and Sonny Angara—are here,” the President said when he introduced them to evacuees at the Gen. T. de Leon High School in Valenzuela City.

“Sonny is here because it’s budget season in Congress. If we have a project, it’s Sonny who will push for our interest,” he added.

Angara, Villanueva, Hontiveros and Biazon are reportedly being eyed for inclusion in the administration’s senatorial slate in the 2013 mid-term elections.

“I’m just helping out. I guess there’s nothing wrong with that. We were asked to go along with the Cabinet,” Angara said in a phone interview. “It’s part of being in politics. You can’t please everyone.”

Villanueva, for his part, said his relief operation was by invitation. “First of all, I’m a member of the Cabinet and anytime the President wants to be anywhere, I will be there. Besides, in those places which we visited, including Bagong Silangan, we have trained residents in disaster management.”

He said he had not kept his political ambition a secret and that he’d prefer to learn the ropes and find out about the concerns of the people now, rather than after he gets elected.

Hontiveros said she was asked by the President to join his visits to evacuation centers because of Akbayan’s relief operations in Marikina, Pasig and Caloocan cities.

“He wanted us to join forces for a day,” she said by phone, explaining that Akbayan had reactivated its relief centers in the aftermath of the heavy flooding.

Netizens had a field day posting their reactions to the politicians’ alleged electioneering activities.

“Anyone else notice how the relief operations by the President is turning out to be campaign sorties for Risa Hontiveros and his other senatorial candidates for 2013?” Facebook user Joaquin Ang posted.

A number of social networking sites also displayed and slammed images of canned goods bearing photos of politicians, including a hashtag #epalwatch on Twitter, an account named “epalwatch” on the free blog hosting platform Tumblr and a number of pages on Facebook such as the Anti-Epal page.

In epalwatch.tumblr.com, “epal” is defined as “any public official who has his/her name/image on any public signage, public space, and/or public property … or anything that relates to such behavior.” It also described precampaigning as an “epal activity.”

A Facebook post which had about 3,000 shares was also circulated online. It said: “Fellow Filipinos please spread: Any grandstanding politician who will display his or her photos or banners in relief operations will be photographed, archived and forever mocked in an online site of shame. This is a time for solidarity, not an opportunity for political prospecting. Thank you.”

User @MrFrancisBaraan posted on his Twitter account: “To those politicians whose ulterior motive for sending out relief goods for flood victims is to get reelected, shame on you.”

Twitter user @ederic also posted on his account: “Hello politicians, do not use this disaster for your 2013 campaign. Someone did that during Ondoy. That candidate lost.”

On a positive note, a post on the Facebook page Anti-Epal showed relief operations by the Department of Social Welfare and Development accompanied by the comment: “The DSWD gave out relief goods yesterday. Look at the bag: No names, no faces, just the way it should be.”

Twitter user @mistervader, however, came to the President’s rescue: “My problem with the whole #epalwatch thing vs Noynoy is … if he didn’t do what he did yesterday, we’d call him lazy. The guy can’t win.” Inquirer Research