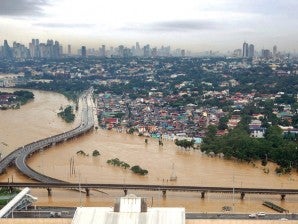 MARIKINA NIGHTMARE An aerial shot of the swollen Marikina River taken on Wednesday and released by the Department of National Defense. More than a million people in and around Metro Manila battled deadly floods as monsoon rains poured endlessly for days trapping both slum dwellers and the wealthy on rooftops in neck-deep waters. AFP/DND

As the skies cleared and the sun shone for the first time in days, the weather bureau on Thursday lifted the heavy rainfall warning in Metro Manila.

The Philippine Atmospheric, Geophysical and Astronomical Services Administration (Pagasa) said it was expecting a gradual improvement in the weather toward the weekend as the “habagat” (southwest monsoon) continued to weaken.

For good measure, Manila Archbishop Luis Antonio Tagle issued an “oratio imperata,” a special prayer for protection from the threat of calamities.

Tagle asked the faithful to implore God to stop the rains that had flooded and paralyzed Metro Manila the past several days.

The monsoon rains, which dumped about 300 mm (12 inches)—or three times the daily average—from late Monday to Tuesday, were the heaviest in three years, Pagasa said.

It said thunderstorms would continually bring intermittent rains over Luzon from late afternoon to dawn.

Weather forecaster Fernando Cada said intermittent rains, a characteristic of the monsoon, were previously enhanced by a shallow low pressure area as well as by Typhoon “Gener” and Tropical Storm “Haikui,” which dumped a large volume of rain on large swathes of Luzon over the past two weeks.

“There is currently no weather system that could enhance the southwest monsoon. But we have observed rain clouds on the Doppler radar and satellite images over the West Philippine Sea that have not dissipated despite dumping rains in Central Luzon, Metro Manila and portions of southern Luzon,” Cada said.

He explained that the rain clouds normally would have dissipated but they had not expected it would bring bursts of downpour over some areas in Luzon.

While generally good weather is expected over the weekend, conditions in the country would gradually improve except in Luzon particularly in the Ilocos provinces, La Union, Pangasinan, Zambales, Pampanga, Bataan and Bulacan where moderate to occasional frequent rains were expected.

Cada said residents in Zambales and Pampanga should be on alert for lahar flows because of the rains.

He said floods and landslides in low-lying areas and river channels were possible so residents were advised to take precautionary measures.

At around 12:20 p.m. Thursday the Pagasa lifted the heavy rainfall warning over Metro Manila after light to moderate rainfall (1 mm to 7 mm per hour) was observed from 10 a.m. to noon.

The weather bureau, however, said that residents in  Caloocan, Malabon and Navotas cities were still advised to expect the possible occurrence of thunderstorms, which might bring moderate to heavy rain.

In a statement, Tagle requested Catholics to “pray kneeling down the following Oratio Imperata in our Masses (after the Post Communion Prayer), Holy Hours, celebration of the Liturgy of the Hours and the praying of the rosary.”

Tagle’s prayer, which beseeches God to stop the heavy rains, also carries a message: It reminds Filipinos that the abuses they heaped on the environment was responsible for the disaster.

Tagle’s prayer, called “Oratio Imperata for the Deliverance from Calamities,” read: “We have not been good stewards of Nature. We have confused Your command to subdue the earth. The environment is made to suffer our wrongdoing, and now we reap the harvest of our abuse and indifference.”

Msgr. Joselito Asis, secretary of the Catholic Bishops’ Conference of the Philippines, said  there was a need for prayer to give people strength and comfort as they rebuild their lives in the aftermath of the disasters spawned by a storm and heavy rains the past weeks.

Classes in all levels in public schools in Manila, however, are still suspended Friday as the city’s major thoroughfares are still flooded, but work in City Hall will resume, Mayor Alfredo Lim said.

Lim said Lagusnilad, the underpass in front of City Hall that was filled with at least 16 feet of water Thursday, would be passable Friday.

The Recto Avenue underpass, where water was estimated to reach 20 feet, will be open to motorists in two or three days, the mayor said.

Lim said the city was placed in a state of calamity to allow barangay leaders access to calamity funds.

As the sun began to peek Thursday, Crisell Beltran was still in disbelief at how so much damage was left behind.

“Was there really no storm, with this kind of flooding?” asked the barangay captain of Bagong Silangan in Quezon City.

Told that it was indeed a nameless monsoon that dumped rains since Monday night, Beltran quipped: “Then what a traitor it was.”

She had her hands full since Tuesday, with thousands of persons who fled from perilous floods.

Some low-lying areas of the community, like Sitio Clemencia, Gawad Kalinga and Tagumpay, were still submerged in muddy waters.

Floods in those areas reached  more than 15 feet, Beltran said. With reports from Nancy C. Carvajal and Julie M. Aurelio