De Lima: No to amendments to juvenile justice law 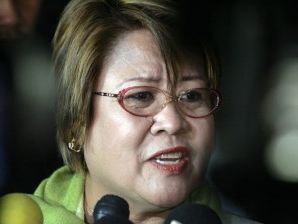 MANILA, Philippines — A House bill seeking to amend the Juvenile Justice and Welfare Act of 2006 and lowers the age of criminal liability can expect no support from the Juvenile Welfare Justice Council, Justice Secretary Leila de Lima said on Thursday.

“We in the JJWC along with the DSWD (Department of Social Welfare and Development), NGOs (non-government organizations), civil society organizations involved in protecting children’s rights will vigorously opposed that bill,” she told lawmakers during a hearing on the proposed national budget for 2013.

She was referring to House Bill 6052 which has been passed on third and final reading. The measure seeks to amend Republic Act 9344 or the “Juvenile Justice and Welfare Act of 2006.”

According to De Lima, the law is not faulty. She blamed “budgetary constraints” as reason why some of the law’s provisions are not fully implemented.

Lowering the age of criminal liability from 15 down to 12 was not an option to the Justice chief, who asked why children deserve to be penalized at such an age.

“We are destroying the future by putting them in jail,” said de Lima, adding that the youth must be prevented from turning into juvenile offenders instead.

She said that they would oppose the measure once it is transmitted to the Senate.