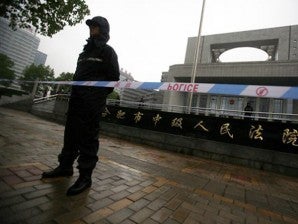 HEFEI, China — A Chinese court heard in a one-day murder trial Thursday that the wife of disgraced Chinese politician Bo Xilai got a British businessman drunk and fed poison to him.

The details were released at a news conference after the end of the trial of Gu Kailai and a household aide, who are accused of murdering Neil Heywood, who had close ties to the Bo family.

Tang Yigan, deputy director of the Hefei Intermediate People’s Court in eastern China, did not say when a verdict was expected. He said Gu and the aide, Zhang Xiaojun, did not object to the facts of the indictment against them.

Neither defendant nor their lawyers have ever publicly given their side of the story and neither has been seen for months.

Tang said prosecutors told the court that Gu sent Zhang to meet and accompany Heywood from Beijing to Chongqing. On the night of Nov. 13, Gu went to Heywood’s hotel and drank wine and tea with him.

“When Heywood was drunk and vomited and wanted to drink water, she then took pre-prepared poison that she had asked Zhang Xiaojun to carry and poured it into Heywood’s mouth, killing him,” Tang said.

Tang repeated what the official Xinhua News Agency reported several weeks ago when announcing the indictment: that Gu and Heywood had a dispute over economic interests, and that Gu thought that Heywood was a threat to her son’s safety and decided to have him killed.

Although two British diplomats were allowed into the court under an agreement with China because of Heywood’s nationality, international media were not allowed to attend.

Tang said the prosecutors believed the facts of the crime were clear and the evidence sufficient, and that “Gu Kailai is the main culprit and Zhang is the accomplice.”

He said material evidence, written evidence, witness statements and other materials were presented.

Read Next
People’s survival fund pushed in the House
EDITORS' PICK
Gilas out to prove Korea win not a fluke; Tab fires back at ‘lucky shot’ remark
Duterte to issue memo on face shields this week
LOOK: ‘Low vaccination’ turnout in 4 Manila sites after no walk-in policy
Eleazar: PNP open to ICC probe but PH judicial process is working
Piolo Pascual: The Ultimate Heartthrob continues to level up
SANTIS Delicatessen: The road to survival is sweet and savory
MOST READ
Duterte to issue memo on face shields this week
Palace: Face shields no longer needed to be worn outdoors
DFA opening 10 satellite offices to boost passport services
Lacson or Pacquiao a possible presidential candidate for NPC – Sotto
Don't miss out on the latest news and information.